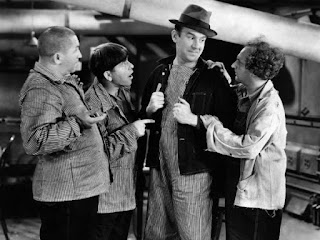 Like how today movies get made based off TV Shows, back in the 1930's there were movies based off of radio shows. Meet the Baron was based off a comedy radio show about the fictional Baron Munchausen. Jack Pearl, the radio actor for the character was hired here to play the Baron (or at least someone who is believed to be the Baron) for the screen.

This film would be directed by Walter Lang. Walter Lang is a director who is mostly associated with musical films like State Fair (1945), The King and I (1956) There is No Business Like Show Business (1954). One of the writers for this film was Herman Mankiewicz, who is known by film fans today for co-writing Citizen Kane. One interesting thing in here is that there is a mule named Rosebud in this. I am not saying this film would have inspired any of Citizen Kane, but it is still an interesting tidbit. On top of this the film has a great cast including Jimmy Durante, Edna May Oliver and Zasu Pitts.

However, what this film is most watched today for is that it includes a group soon to be known as The Three Stooges. At this time they were known as Ted Healy and his Stooges. Ted Healy was originally the boss and leader of the group, yet after some personal problems between them they would separate, and the group would become The Three Stooges. Meet the Baron was the first feature film to feature Curly (although he had appeared in some shorts with this team before). Earlier Shemp would appear in these films with Moe, Larry and Ted. However, Shemp was not happy with Ted and left the group. Shemp was replaced by his and Moe's younger brother, Curly. However, when in 1946 Curly would have a stroke, he would be replaced again by Shemp, who now was willing to be part of the team since they were no longer working with Ted. In this film Curly was credited as Jerry Howard, as his real name was Jerome Howard. This is one of the very few times he would be credited as such. Walter Lang would later direct the Stooges again in the feature film, Snow White and the Three Stooges (1961).

Curly wasn't the only star to have Meet The Baron as a feature film debut. This was the film debut (not just feature) of Lynn Bari, who would star in quite a few B-movies including Return of the Cisco Kid and Hotel For Women.

The story begins with the real Baron (Henry Koller) and his two assistants (Jack Pearl and Jimmy Durante) traveling through the jungle. The Baron discovers they are low on supplies and leaves his assistants out to die. At this time some explorers find the two assistants and mistake one for the Baron (Jack Pearl) and take him and his friend to the U.SA. The phony Baron must keep up the facade and not be found out.

This film is very entertaining, it has a good sense of humor, a great cast and even a great musical number. Most of all though this film is just good corny, silly fun.

The Three Stooges: An Illustrated History, From Amalgamated Morons to American Icons by Michael Fleming