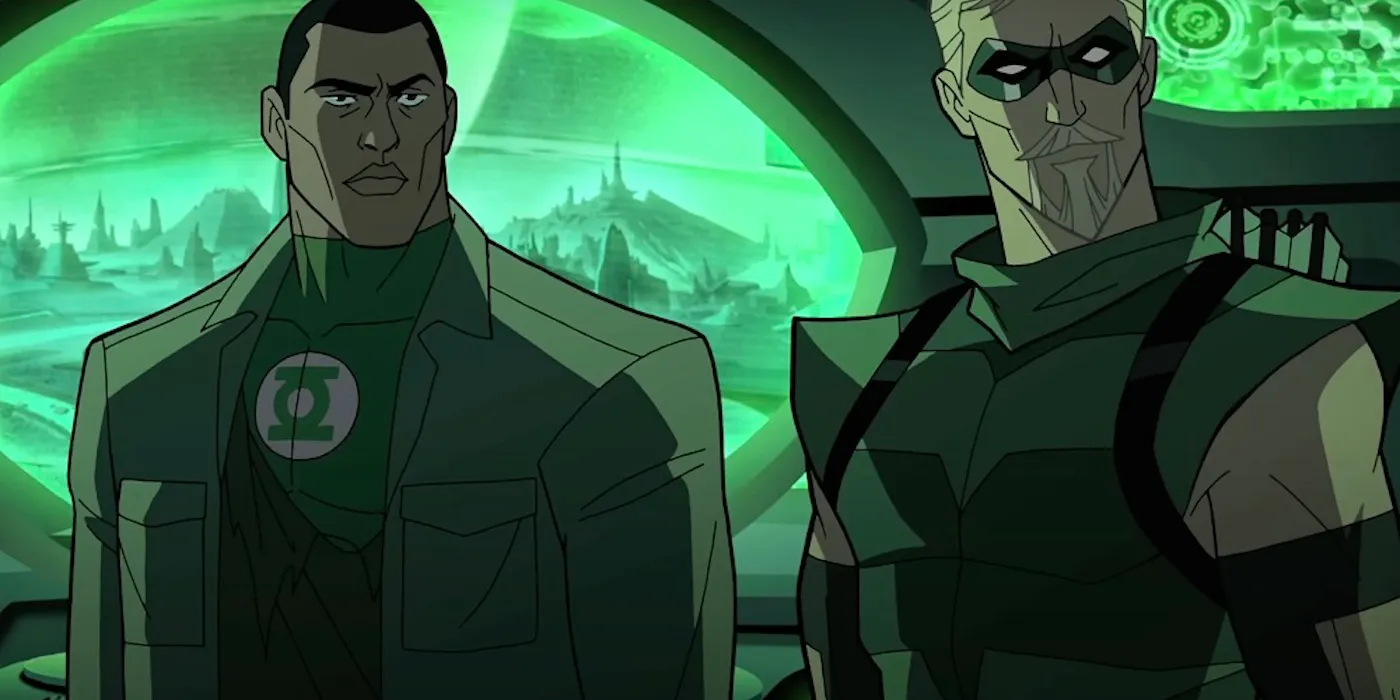 Note: This is the newest of DC Comics series of animated direct to video movies.

What really makes this movie work is how well it presents the characters. John Stewart is one of my favorite Green Lanterns and this film perfectly shows why. He is never defined by the ring or the powers it gives him. In fact as the film starts he is strongly opposed to the idea of being a Green Lantern. This movie also goes into the PTSD he has suffered from his years in the military, which often pushes him to dark places in the middle of battle. This subject is treated very respectfully, and the film does a great job of having this be a part of his character but not something that defines him either. What does define him is what is most necessary for a Green Lantern. His ability to push on through anything and his sense of duty even when what he knows is the right thing isn't the thing he would choose. His character arc over the course of the movie is well realized and you truly believe his growth as a person and as a Green Lantern. This movie also does a great job with it handles Hawkgirl and Green Arrow. This is the tough no nonsense Hawkgirl that I have been a fan of since I was introduced to her through the wonderful Justice League cartoon show. She is hard and rough on the outside and willing to go further than most of the other heroes, yet she is still clearly a hero and is always seeking justice and what is right. I love how Green Arrow despite being a superhero with no powers, he never lets himself take a back seat to any of the other heroes.

While the storyline of this film may not be especially original, it is very engaging. All the main characters go through arcs that make perfect sense and help us understand better why we love these characters. This movie also benefits from some wonderful action sequences that are simply a lot of fun.

This film has the main fault of many of these DC direct to video animated movies. That is that it feels quite rushed. This movie serves as an origin story for John Stewart, a look into his PTSD, his reluctance to be a Green Lantern, his meeting of some Justice League members, a story about the disappearance of Hal Jordan, a story about Green Arrow dealing with what happened to his best friend, a story of Hawkgirl learning to trust others and an action film about a huge intergalactic war. A movie with all this going on shouldn't be less than an hour and a half. Because of this shorter length some of these plot points don't receive the time to be as fleshed out as they should be, and a few seem to be dropped at times as the movie goes on. This movie also has a big twist that I could see coming much too soon.

While this may not be the best of these movies, this film is a really fun and well-made superhero adventure.