Today's musical selection begins with Roy Rogers and Dale Evans with Jesus Loves the Little Children. This comes from a 1955 Little Golden Record that also included them singing The Good Lord is Going to Take Care of You.   This song was written by C. Herbert Woolston and is said to have been inspired by Matthew 19:14 ( “Let the children come to me. Don’t stop them! For the Kingdom of Heaven belongs to such as these.”) The song is to the tune of the 1864 Civil War song, Tramp Tramp Tramp (written by George Fredrick Root). Roy and Dale only sing the refrain of this song as that is all that was commonly used in Sunday schools.

This is followed by Merle Haggard with Victory in Jesus. Though there are many times when we feel defeated, it is important to know that as Christians we have victory in Jesus. He is our savior and no matter what happens to us on Earth, one day we will find ourselves in heaven, where there will be blessings beyond anything we have ever known or could ever imagine. By dying on the cross, Jesus has won the fight against sin and as we know by the book of Revelations, one day he is coming back to Earth to put Satan in chains. Merle is joined on this song by his good friend, Albert E. Brumley Jr.

Next comes Kris Kristofferson and Larry Gatlin with Help Me. In 1971 Connie Smith had invited Kris Kristofferson to the Evangel Temple. Jimmie Snow (the pastor of the church) had asked Larry Gatlin, who was a member of this church and currently worker as a janitor, to come up and sing a song he wrote. That song was Help Me and it had a major effect on Kris. Kris would later say, "It was what I guess you call a religious experience. I've never had one before or since. To this day I don't know why I did it. I think Jimmy sensed I didn't know what I was doing because he asked me if I was ready to be saved and I told him I didn't know. He put his hand on my shoulder and asked me to get down on my knees. There were a number of us kneeling and I don't remember what he was saying. It was something about freedom from guilt. All I can remember is that I broke into tears. I was weeping and when it was over I felt like I had been purged. I was carrying a lot of guilt at that time. I felt I had disappointed my family, my friends, my ancestors and everybody that knew me. So I wrote that song [Why Me Lord]." Because of the effect this song had on Kris, Kris recorded the song as a duet with Larry Gatlin on his 1972 album, Jesus Was a Capricorn. Kris later talked about this saying, "I did it because I loved the song and was so grateful for the effect it had on me. To further demonstrate my gratitude, I put it on the B-side of my single Why Me instead of one of my own, giving Larry mechanical royalties on the biggest single I ever had. Payback!"

This followed by Rex Allen with his recording of Sleep Little Moses. This song comes from his 1959 album, Mister Cowboy. As well as my fellow country music fans, my fellow movie buffs might also know Rex Allen. Like Gene Autry and Roy Rogers, Rex had starred in some singing cowboy B westerns in the 1950's. However today his movie career might be best remembered by Disney buffs for narrating such Disney films as The Legend of Lobo (1962), The Incredible Journey (1963) and Charlie, the Lonesome Cougar (1967). He also narrated the Hanna-Barbera feature film, Charolette's Web (1973).

Personal Jesus is an example of how a song can take on a meaning to a listener that the author did not intend. Johnny Cash said that this was a song he wished that he had wrote. He felt it summarized perfectly man's relationship with God. That Jesus is always willing to forgive and have a relationship with anyone who desires to know him. Yet this when Martin Gore had originally wrote this song, he did not intend it to be actually about the Christian faith. He wrote it after having read Pricillia Presley's book Elvis and Me. Gore would state, "It's a song about being a Jesus for somebody else. It's about how Elvis was her man and her mentor and how often that happens in love relationships."

Next comes The Sons of the Pioneers with their 1937 recording of Leaning on the Everlasting Arms. This hymn began with a man named Anthony Showalter. As a fan of gospel music and an elder in a Presbyterian church, he held many "singing schools" at various churches in the south. One day he received two letters from former students who were struggling after their wives had passed. To respond to these letters, Showalter consulted scripture. He came across Deuteronomy 33:27, "The eternal God is thy refuge, and underneath are the everlasting arms." After reading this verse lyrics for a song chorus went through his head and he wrote down, "“Leaning, leaning, safe and secure from all alarms; Leaning, leaning, leaning on the everlasting arms.” After using this in the letters to his former students he sent this chorus to his friend hymnist, Elisha Hoffman. In the letter he also wrote, “Here is the chorus for a good hymn from Deuteronomy 33:27, but I can’t come up with the verses.” Hoffman then wrote the rest of the lyrics to which Showalter put to music. The hymn was published in 1887.

Today's movie trailer is The Far Country (1954). This was the fourth of the great series of western films that director Anothony Mann and actor James Stewart made together. Despite having made so many Westerns together though the biggest hit the two collaborated on was the musical biopic, The Glenn Miller Story (1954). The three westerns the two made before this film were Winchester '73 (1950), Bend of the River (1952) and The Naked Spur (1953). The two made one more western together, The Man from Laramie (1955). They were set to make Night Passage (1957) together, but Mann was replaced as the director.

If you have trouble reading the contempary review of The Far Country click on the page below and use your touch screen to zoom in. 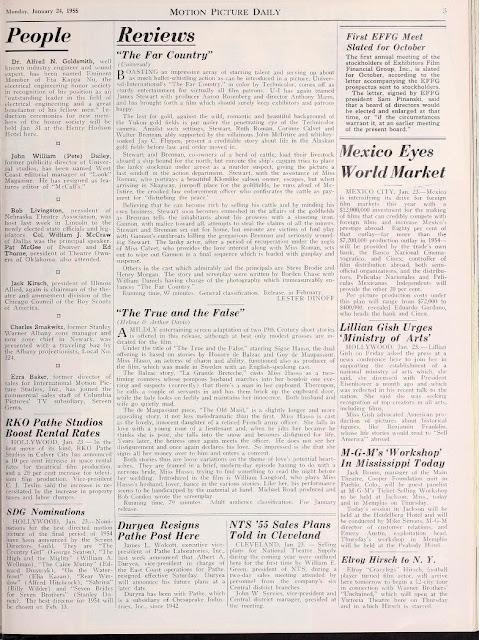 Now for a sermon by S.M. Lockridge.

Jesus answered, “I am the way and the truth and the life. No one comes to the Father except through me. John 14:6

He saved us, not because of righteous things we had done, but because of his mercy. He saved us through the washing of rebirth and renewal by the Holy Spirit. Titus 3:5

Produce fruit in keeping with repentance. And do not begin to say to yourselves, ‘We have Abraham as our father.’ For I tell you that out of these stones God can raise up children for Abraham. Luke 3:8

Therefore he is able to save completely those who come to God through him, because he always lives to intercede for them. Hebrews 7:25

These things I have spoken unto you, that in me ye might have peace. In the world ye shall have tribulation: but be of good cheer; I have overcome the world. John 16:33

And we know that all things work together for good to them that love God, to them who are the called according to his purpose. Romans 8:28

But they that wait upon the LORD shall renew their strength; they shall mount up with wings as eagles; they shall run, and not be weary; and they shall walk, and not faint. Isaiah 40:31

Do you see a man wise in his own eyes? There is more hope for a fool than for him. Proverbs 26:12

Trust in the Lord with all your heart, and do not lean on your own understanding. Proverbs 3:5

For I know the plans I have for you, declares the Lord, plans for welfare and not for evil, to give you a future and a hope. Jeremiah 29:11

Thanks for joining me. There will be no Cowboy Church post for the next two weeks, because I will be on a trip to Israel with my church. However when I get back, these weekly posts will soon continue. Happy trails to you until we meet again.