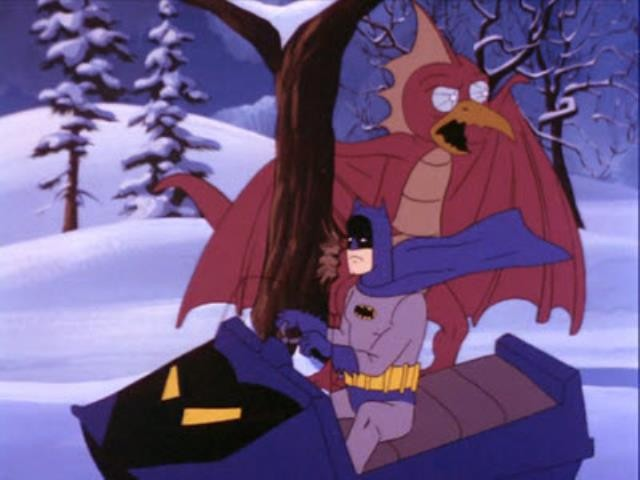 Over the course of its long run, Super Friends changed formats and titles many times. Probably the most famous and popular format was an hour-long format featuring two half hour segments. The first of these segments was called The New Super Friends and featured only Superman, Wonder Woman, Aquaman, Batman, Robin and the Wonder Twins (a pair of characters created specifically for this series) and they would most of time fight one-off villains created specifically for this show. There was also the Wonder Twins' pet monkey Gleek but more about him later. The second segment would be called Challenge of the Super Friends and would feature a wider variety of heroes and have them fight the legion of doom (a group made up of some of the greatest super villains from the comics. Rokan: Enemy from Space marked the first The New Super Friends segment.

In this episode a giant dinosaur-looking monster attacks a city leaving destruction in its wake. The Super Friends come to the rescue but seem to be useless as the creature is as powerful as Superman. Superman soon realizes why this is. The creature comes from Krypton just like Superman.

This episode is pure corny fun. Though this episode may seem too corny and dated for many modern superhero fans, I have always embraced and loved the sillier aspects of superhero stories making this a lot of fun. Also there is a certain charm to such a simple unpretentious story, that does not try to be anything complicated or epic.

This episode certainly benefits from a great villain design. While this villain is simply a force of nature and has no personality to speak of, he is still quite memorable. He has a powerful and threatening look and one that simply looks how a child would imagine such a character looking. There is also something that is always satisfying about seeing superheroes face off against a giant monster.

While Super Friends has often been criticized for its characterizations of the characters being bland, this episode really gets the character of Superman right. When it seems like the only way to defeat Rokan is to risk his own life, Superman has no problem doing this stating that they should do things according to "the greater good for the greater number of people." The fact that Superman never even hesitates to say this and shows little fear of what could happen to him, shows why he is such a great character. Superman is a character that should represent who we aspire to be and be someone we can always look up to. That is something that can perfectly be said about this version of Superman here.

Now I have to get on to what will be my major complaint for many of these episodes. That would be Gleek the monkey. This character is a waste of space and often times just gets the Super Friends into more trouble. In this episode just as the Wonder Twins are going to help Aquaman, Gleek ruins their plan to. Gleek is in a long line of comedic animals to be featured in Hanna-Barbera action shows. The idea of having a comedic animal sidekick is not a bad one, but Gleek is never funny. There has never been a joke with this character that has made me smile once and when he ruins things for the Super Friends, it simply annoys the audience. Luckily He doesn't get much screen time in this episode but it is still too much.

All in all (and despite Gleek), this episode is quite a bit of fun.