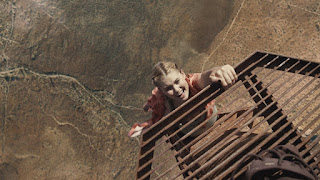 An enjoyable suspense film with a few good scares.

This movie has an incredibly simple premise (in fact too simple for its runtime). Two young women climb up an abandoned TV tower in the middle of nowhere, but it does not go as planned and the two get stranded up there. Movies featuring characters being suspended in a very high place have a long history, think of Harold Lloyd in Safety Last (1923). There is a reason this premise still exists today and that is because it still has the ability to frighten and excite. This movie is proof of that. Even if you aren't afraid of heights, some of these scenes will keep you on the edge of your seat. Part of the reason for it is that even in today's movie savvy world, this film looks quite real. You really believe that these characters are about to fall to their deaths at any moment. The shots looking down from the tower are truly terrifying. This movie also benefits from there often being the slight moment of suspense that makes one wonder if the film is going to follow the cliché's or do something different. The main characters are also quite likable. There is little to no depth or subtlety to these characters, but they are likable, and this makes any scene with their lives in danger more suspenseful. There is also a twist towards the end that while done quite a few times before works better than should of. All of this means the most important aspect of the movie is its strongest asset.

However, there is quite a bit that doesn't work about this movie. This is definitely evident in the dialogue. Much of this dialogue seems to be trying too hard to sound like how two hip young women would talk. There is some soap opera type drama that happens between the two main characters and it seems completely forced and unnecessary. The humor in this film is quite bad and I can't think of one time a joke made me even smile. However the main fault is the film is longer than it needs to be. While this may be strange to say of a movie less than two hours in a time when many movies ran well over two hours, the length is simply too much for this simple of a story. After a while there are too many attempts to get down and too many contrivances that make things more difficult that the film can feel a bit repetitive.

This may not be a great film but it does provide a fun trip to the movies.