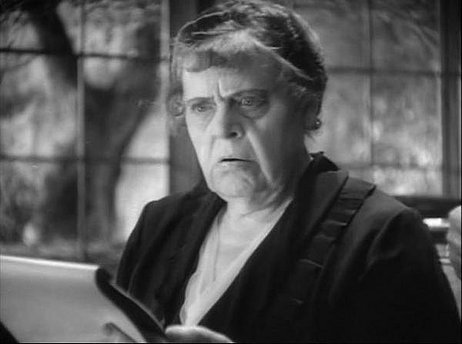 It amazes me that Marie Dressler and so many of the films she appeared in are so forgotten today. From 1930 to her death in 1934, Marie was voted as the biggest box office drawl in Hollywood. She was not your typical Hollywood star, mostly because she was in her 60's at this time, but she was extremely popular with early 1930's audiences. One of her best performances was in the 1932 film Emma.

In this film Marie plays a nanny named Emma, who is essentially a mother in all but name of the children. After the children grow up, she decides to take a trip to Niagara Falls. She is worried about leaving the family. The family's father (Jean Hersholt) decides to go with her and ends up asking Emma to marry her. The father passes away and leaves the money to Emma. His children are angry and want to sue Emma over this money. The exception to this is Ronnie (Richard Cromwell) who has a stronger connection to her than the other children.

This film also featured Myrna Loy in her first role for MGM. She was also working on two other films at this time and was very stressed. Marie told Myrna "Get your chin up, kid. You've got the whole world ahead of you." Helping Loy to gain back her confidence and put on a great performance. Loy had nothing but nice things to say about Marie Dressler in her autobiography Being and Becoming. She would go on to a great career at MGM especially with the classic Thin Man movie series.

Emma is an amazing film. Marie Dressler's performance is near perfect, the script is great, the film is fantastically directed, and everything just works. The story is sentimental but is extremely effective and the sentiment never feels forced. This is a must watch movie, for all lovers of classic film.

The movie was a big success at the box office and Marie Dressler was nominated for an academy award for this film (though she didn't win).