Hello my friends and welcome back to another service of Cowboy Church.

Today's musical selection begins with The Sons of the Pioneers with their 1937 recording of Dwelling in Beulah Land. Dwelling in Beulah Land was written by C. Austin Miles (who also wrote the gospel classic In The Garden) and was first published in 1911. C. Austin Miles once said, “It is as a writ­er of gos­pel songs I am proud to be known, for in that way I may be of the most use to my Mas­ter, whom I serve will­ing­ly al­though not as ef­fi­cient­ly as is my de­sire.” Roy Rogers (at this time Leonard Slye) sings lead on this song. This was his last year with the Pioneers before he would leave to start his solo movie career.

Next comes Randy Travis with The Unclouded Day. This song was written in 1879 by Josiah Kelley Alwood. Alwood would later write about the creation of this hymn. “It was a balmy night in August 1879, when returning from a debate in Spring Hill, Ohio, to my home in Morenci, Michigan, about 1:00 a.m. I saw a beautiful rainbow north by northwest against a dense black nimbus cloud. The sky was all perfectly clear except this dark cloud which covered about forty degrees of the horizon and extended about halfway to the zenith. The phenomenon was entirely new to me and my nerves refreshed by the balmy air and the lovely sight. Old Morpheus was playing his sweetest lullaby. Another mile of travel, a few moments of time, a fellow of my size was ensconced in sweet home and wrapped in sweet sleep. A first class know-nothing till rosy-sweet morning was wide over the fields. To awake and look abroad and remember the night was to be filled with sweet melody. A while at the organ brought forth a piece of music now known as 'The Unclouded Day.' A Day and a half was bestowed on the four stanzas.”

Now we join Ernest Tubb with his 1936 recording of The Right Train to Heaven. Ernest wrote this song himself. Though he recorded the song in 1936, it would be released as a single in 1942. This is because there was a musicians strike in 1942, that made it hard to get new recordings so the label released this old recording that didn't receive a proper release. This recording was part of Ernest's first recording session on October 27, 1936.

Next comes Bob Dylan with Gospel Plow. Though Bob Dylan is praised today hugely for songwriting at the beginning of his career, he was often an interpreter of old folk songs. His 1962 debut album only contained two original songs and all the rest were covers. He would return to the role of an interrupter of folk songs for his 1992 album, Good As I Been To You and his 1993 album, World Gone Wrong. Gospel Plow comes from Bob's self-titled debut album. It is unknown who actaully wrote this song but it is believed to be an African American spiritual. It was most likely inspired by Luke 9:62, "No one who puts his hand to the plow and looks back is fit for service in the kingdom of God."

This is followed by Johnny Cash singing That's Enough. This recording is from John's 1958 album, The Fabulous Johnny Cash. This album was John's first album at Columbia Records after leaving Sun Records. Sam Phillips, his producer at Sun, did not want John to record much gospel music as he felt it would not sell as well as country or rock and roll. This was disheartening to John, who wanted to sing gospel more than any other type of music. Naturally for his first album away from Sun, John would include a few gospel songs. His next album for Sun would be a full gospel album entitled Hymns by Johnny Cash.

Next comes Hank Williams with Thirty Pieces of Silver. Though none of us have done what Judas had done to Jesus, we have all let Jesus down at times when we chose not to follow him. So many have turned down the wonderful gift of Jesus for much less than thirty pieces of silver. Yet we must remember that Jesus loved Judas and knowing all along what Judas would do to him, still wanted to be a part of Judas' life. In the same way he wants to be a part of our lives regardless of what we do. If Judas were to have repented and turned to Jesus as his Lord and savior, there is no doubt Jesus would have welcomed him back with open arms. In the same way, no matter how bad our sins are, Jesus is always waiting for us with open arms.

Today's musical selection ends with Roy Rogers singing What a Friend We Have in Jesus.


Today's movie trailer is for Destry Rides Again (1939), starring James Stewart and George Marshall. During the silent era Marshall had directed films with some of the biggest movie cowboys of that time, including Tom Mix and Hoot Gibson. He would also make a name for himself as a fine comedy director, especially in the talkie era. He directed such great movie comedians as Laurel and Hardy, Will Rogers, Bob Hope and W.C. Feilds. Perhaps that is why he did such a great job combining the two genres in this movie.

If you have trouble reading the following page click on it and then use your touch screen to zoom in. 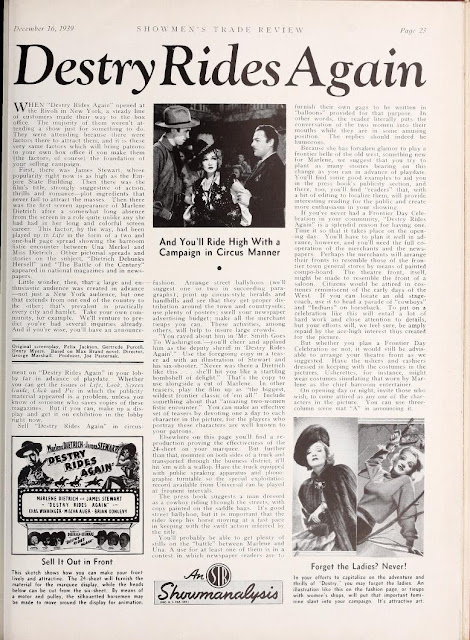 Next is C.S. Lewis' essay, What Are We to Make of Jesus Christ.

For by grace you have been saved through faith. And this is not your own doing; it is the gift of God, not a result of works, so that no one may boast. Ephesians 2:8-9

Not everyone who says to me, ‘Lord, Lord,’ will enter the kingdom of heaven, but the one who does the will of my Father who is in heaven. Matthew 7:21

Then he brought them out and said, “Sirs, what must I do to be saved?” And they said, “Believe in the Lord Jesus, and you will be saved, you and your household.” And they spoke the word of the Lord to him and to all who were in his house. And he took them the same hour of the night and washed their wounds; and he was baptized at once, he and all his family. Acts 16:30-33

Therefore encourage one another and build each other up, just as in fact you are doing. 1 Thessalonians 5:11

After Job had prayed for his friends, the LORD restored his fortunes and gave him twice as much as he had before. Job 42:10

For sin will have no dominion over you, since you are not under law but under grace. Romans 6:14

But God shows his love for us in that while we were still sinners, Christ died for us. Romans 5:8

There is surely a future hope for you, and your hope will not be cut off. Proverbs 23:18