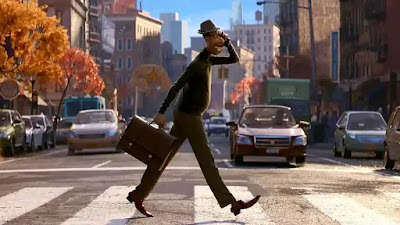 While not perfect, there is a ton of Pixar charm and magic to go around.

So much of what makes this movie work comes from its message and its imagination. This movie has a great and very thought provoking message about what we truly live for and how easy it can be to misunderstand that concept. This message will connect with younger Pixar fans but not as much as it will for adult Pixar fans. This is a truly beautiful and inspiring message and one that will make you stop and think about what you are living your life for. The realm of the great beyond and the great before are wonderfully designed and creatively thought-out. There was obviously a lot of thought and effort put into these places and it pays off. Just as great was how our world was portrayed. It felt quite magical while still feeling like our world and not some idealized place. The filmmakers found beauty in the real world without ever sugarcoating a thing. The two main characters are very likable and relatable. They are not simply stereotyped personality traits but fully thought-out people with quite a few facets to there personality.

There are definitely some places where this film falls flat.. There is a lot of comedy from beginning to end but there are only a few jokes that are actually funny. While there aren't many really bad jokes (there are few groaners here), most of them left me without much of reaction. Simply put I felt like I should have laughed more. While the two main characters were quite likable, the rest of the characters are simply one note stereotypes rather than feel like real people. Also while this movie may not be especially long there are still a few times in which it kind of drags and feels a bit longer than it is. However I definitely felt the good parts of this movie overcame these faults, as the parts of this film that worked were extremely good.

Posted by Michael J. Ruhland at 8:07 PM No comments:

If this review seems quite late there is a reason for that. If last year was a normal year, I would have seen it in a movie theatre soon after it came out. However last year wasn't a normal year and the only way I could see it was by streaming. Even as a Disney fan, I have found many of the recent slew of Disney remakes rather poor films. I am often much more picky about what I watch at home than I am what I watch in theatres. Because of this and my dislike for the previous Disney remakes, I simply skipped this film. However when I got this as part of a two movie Blu-Ray set with the animated version (which I love but I didn't have on Blu-Ray), it felt like about time I finally sat down and watched this. I didn't except much but imagine my surprise when I finally saw the movie and really liked it.

Unlike the previous Disney remakes, Mulan does what a good remake is supposed to do. It takes the basic story of the movie it is remaking, but gives a quite different take on it. In return this does not feel like an inferior copy, but rather a brand new movie based off the Mulan legend. Because of this, Mulan is one of the rare Disney remakes I can picture myself actually re-watching.

On top of this the movie is quite good in its own right. Yifei Liu was perfect as the title character (the only problem I can think of with her is that she didn't quite look like a guy, when dressed as one). She perfectly captures the courageous and daring side to this character as well as the inner insecurities. The character herself is very well written. She is always completely relatable and human, as well as a kick-butt action hero. Speaking of action the action scenes in this film are fantastic. I found myself wishing I could have been able to see them on a big screen. In fact this whole movie was a complete visual treat. The basic storyline is still a great one and it is told quite well here. This movie even corrected one of the faults of the earlier film, by making the villains more interesting.

I will admit there are some moments in this film that felt quite rushed here and this can briefly take you out of the movie. The humor in this film also isn't very good, but since there is not too much of it, this does not become a problem.

This is my favorite of the Disney remakes so far, and I hope that future Disney remakes (because let's be honest there are going to be a lot of them), follow the example of this film.

Posted by Michael J. Ruhland at 8:02 PM No comments: 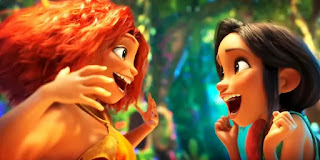 A highly enjoyable and fast paced animated comedy, that gives us just the amount of escapism we need right now.

Like the first movie what makes this film stand out is the sheer likability of the main characters. As zany and over the top as these characters can get at times, deep down they are really a family and the family bond between them feels real and genuine. This bond allows the movie to go over the top for comedy's sake while still not losing the emotional center of the story. As well as the characters from the previous movie I found myself really liking the character of Dawn. She is not only funny and likable but her relationship with Eep was very well handled. I like how the filmmakers did not go the obvious route and make them romantic rivals for Guy. Instead they have a fantastic friendship and the obvious clash over Guy never actually happens. The look of this film is also fantastic. Not only does this movie look beautiful but every visual on screen has a point to play in the story and the look draws you further into the film. The voice acting is fantastic here as well. While there are major celebrities in the voice cast, in the best DreamWorks tradition the actors never feel like they were cast because of their celebrity status but because of how well they fit the characters.

This is a very fast paced and energic film and it throws plenty of jokes at us quickly. These jokes can range from very funny to not funny at all. However there are more than enough jokes that work, that we can forgive the weaker ones. Though I will say the window joke while decently funny at first is not funny enough to repeat the amount of times the filmmakers do throughout the movie.

My biggest complaint about this movie was the Bettermen parents. However I will admit they could have been much worse. These characters are not too annoying or unlikable, but instead they are just bland when compared to characters like Eep and Grug.

Posted by Michael J. Ruhland at 8:11 PM No comments: 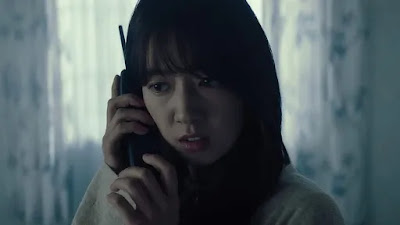 Note: This film can be seen on Netflix.

Fantastically tense Korean thriller that truly keeps you on the edge of your seat.

I don't want to give much about the plot away in this review, because this is one of those movies you should know as little as possible about before watching it. I will say however that this is a movie that will keep you guessing throughout and there are many unexcepted turns. One could argue that the movie doesn't quite make complete logical sense. The truth is it doesn't but as the movie went on that did not bother me at all as I became so invested in the emotion that I excepted this movie as having the logic of a nightmare. Logically it may not make sense but it makes perfect emotional sense. Chung-Hyun Lee's first feature length movie (this one) already shows a great director and writer at work. The pacing here is near perfection. It incredibly builds up the suspense for each song, taking its time while still perfectly keeping the viewers interest and then delivers each intense moment at the right time. The script itself is extremely clever and knows just when to give you what you except and when not to. The two main characters are great and the performances by the two actresses are even better. Park Shin-Hye and Jong-seo Jung deliver these parts perfectly and help make you not only believe in these somewhat over the top characters but they also pull you into the suspense of each scene. Jong-seo Jung definitely has a role that not many actresses could play effectively and she pulls it off like a pro (it is hard to believe this is only her second movie). What she does here is incredible and the film would be nowhere as terrifying without her.

While not giving any spoilers I will say the scene during the credits simply doesn't work and comes off as silly rather than intense. However when a film doesn't really falter until the end credits, than it is still a darn good movie.

For anyone who likes suspense movies, this is a must see.

Posted by Michael J. Ruhland at 8:13 PM No comments: 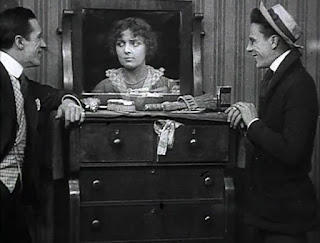 If you can't guess by the title this movie's storyline revolves around a romance at Christmas time. What you may not be able to guess is just how much the filmmakers fit into this film's short running time. There are two stories happening at the same time here. One of them is a silly lighthearted romantic triangle mostly played for laughs. The other is a more dramatic story about a cab driver. This movie's writer, Alan Crosland, future director of such movies as The Flapper  (1920) and The Jazz Singer (1927), does an excellent job tying these two stories together without there tones clashing. While two seemingly unrelated stories intertwining is something we are all familiar with today, in 1915 this was common practice for filmmakers, making all the more impressive of just how well done it is here.

Films often reflect the time they were made in. These can include backdrops, references that may not be as well known today or in the case of this movie a different way of storytelling. It is no secret that people back in the 1910's often had a greater attention span than the average person today. In today's movies, including most art films, important plot points are called attention to, because otherwise most of the audience would miss them. We may look at this with a little distain thinking we wouldn't be included in this group, but the truth is the we have become so reliant on this type of storytelling in our media that many of us fall into this group without even noticing it. This movie does not offer us such favors and in many ways demands our attention. Plot points can happen often in the background of scenes and can easily be missed if we let our mind wander. This makes this a film that warrants repeat viewings before we can truly get all that is going on. Yet if you give yourself completely over to this movie, you might be surprised at just how much fun you having watching this movie. From the humor to the sentimentality this movie is a Christmas delight and will be a treat to both silent film fans and newbies.

Posted by Michael J. Ruhland at 8:15 PM No comments: