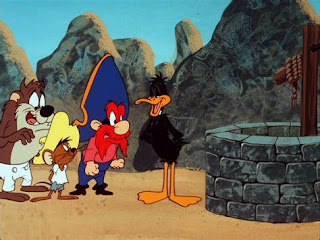 Are the Looney Tunes compilation movies flawed? Yes. Do I absolutely love them? Heck yes.

For those of you unaware well after the golden age of Looney Tunes, Warner Brothers made 5 feature length movies combining the classic cartoon shorts and new animation. These movies are The Bugs Bunny/ Road Runner Movie (1979), The Looney Looney Looney Bugs Bunny Movie (1981), Bugs Bunny's 3rd Movie: 1001 Rabbit Tales (1982), Daffy Duck's Movie: Fantastic Island (1983) and Daffy Duck's Quackbusters (1988) (I am not including Bugs Bunny Superstar (1975), because the film is a documentary with no new animation). The first of these was directed by Looney Tunes legend Chuck Jones. The next three were directed by another classic Looney Tunes director, Friz Freleng. The last was the only directed by people who did not work on the classic Looney Tunes shorts, Greg Ford and Terry Lennon.

As a kid these movies were just as much of a part of my Looney Tunes diet as any of the classic shorts were. Kids have the ability to watch the same movies over and over and never grow tired of them and that is just what I did with these movies. As such these features have become and remain just as much of a part of my Looney Tunes vocabulary as any of the classic shorts. Since I got into these movies as a kid, they actually served as my introduction to some shorts that weren't on TV as often (Mexican Borders (1962), The Pied Piper of Guadalupe (1961), The Unmentionables (1963), Curtain Razor (1949), Catty Cornered (1953))  still whenever I watch those shorts I think of these features. Childhood is probably the best time to be introduced to these movies (though they are aimed just as much at all audiences as the old shorts). When you are a kid you are not a film critic but rather someone simply looking to be entertained. The faults of these movies may be obvious but none of them stop the films from being incredibly entertaining. The classic cartoons are just as funny as ever when watched as part of a feature length movie and while the new scenes do not reach the heights of the classic cartoons they are still entertaining in their own way. The largest faults come from the connection of the old and the new. The animation is obviously better in the old and Mel Blanc's voice has aged. This can make it all too obvious what is old and what is new and therefore disrupt the flow of the movie. There are also times when the inclusion of certain cartoon shorts can feel forced into a movie's story. However while these faults may be very noticeable to the film critic in me, they make little difference to the movie fan in me. Every time I watch these movies I find me enjoying myself too much to care about these faults. That is why they remain common choices for watching movies at home for me (I hope that one day I can see these on the big screen).

These movies may not be for purists and I fully understand anyone who doesn't like them. However I admit that I not only like them but love them.