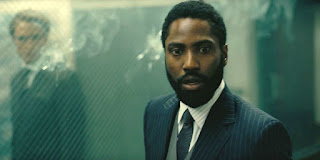 Note: If this review seems really late there is a reason for that. I missed this film when it was new. However when I saw it was still playing at a movie theater nearby me, I knew I had to see it. As I usually write reviews of new movies I just saw in theaters, I decided this is still new enough to include here.

Style over substance, but the style is fantastic.

I must start this review by stating the obvious. The action scenes in this movie are incredible. These are huge scale action scenes that simply look amazing on the big screen. They are only further enhanced by the use of objects and people acting in reverse. This not only looks extremely cool, but it gives the movie a unique feel different from other action movies.. Even when these action scenes aren't happening, this film is brimming with atmosphere. I am sure there are those who will get lost at points, but still enjoy this movie in a way similar to The Big Sleep, where they get so engrossed in the atmosphere that they don't care. The design and cinematography (by Hoyte Van Hoytema, who had previously worked with Nolan on Interstellar and Dunkirk) also make every scene a visual treat. The cast is excellent and special praise must be given to the film's star, John David Washington, who pulls off a very difficult role very well.

The story itself is at many time one of a standard but good action movie. However Christopher Nolan feels the need to try and make this plot more complex. This never fully works as these complexities seem to serve no reason but to make this movie more confusing. There is no depth or further story interest achieved through this. While a lot of great movies have quite complex plots, when a film's plot is complex simply to be complex, it simply doesn't work as well as it should. Nolan had an above average action movie here and it is unfortunate that he felt the need to do this. While this is still a good movie if he had dropped these complexities and simply made this a more straightforward action film, it could have been even better.

If you can see this on the big screen I highly recommend you do. It may be very flawed, but there is still a whole lot to enjoy.
Posted by Michael J. Ruhland at 8:55 PM