Some Cartoons For Saturday Morning #116

Today's cartoon selection begins with a classic Merrie Melody, I Wanna Be a Sailor (1937). This cartoon was directed by the one and only Tex Avery. The film is typical of Tex's Merrie Moldies of this time period. This is more story driven than his later MGM work and has a bit of a moral to it. Yet there are some great moments that perfectly show Tex's wild and zany humor that would soon become more prominent. This may seem like a strange combination but in this case it works very well and gives us a delightful cartoon. The following is an exhibitor's review from the Motion Picture Herald, "I Wanna Be a Sailor: Merrie Melody - These are very good. They certainly help round out a program. -Charles Rossi, Strand Theatre, Schroon Lake, N.Y." The following is from an issue of The Film Daily dated Aug. 17, 1937, "With the music recorded on "I Wanna Be A Sailor," Leon Schlesinger has completed his first "Merrie Melodie" Technicolor cartoon for his 1937-38 program one month ahead of schedule. Producer's schedule for new season calls for 36 subjects to be released by Warner Brothers."

Next comes a black and white Mickey Mouse, The Mad Dog (1932). Though today Mickey is mostly associated with slower paced and more sentimental cartoons, these earlier Mickey films are fast paced affairs with non-stop gags from start to finish. This was noted by a review in The Film Daily which stated about The Mad Dog, "A Mickey Mouse cartoon, which is one of the fastest-action animateds [sic] ever produced." This review goes on to say, "Just as exciting as a wooly western meller - and funnier of course." J.B. Kaufman and David Gerstein's book, Mickey Mouse: The Ultimate History notes that the score uses the promotional song, The Wedding Party of Mickey Mouse for your benefit that song will be included underneath. 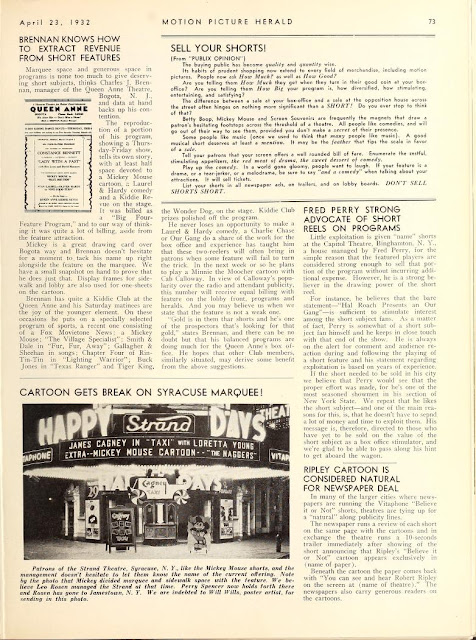 With April Fool's day not far away, I feel it is a perfect time for the following Popeye cartoon, Cookin' With Gags (1955).


The Betty Boop cartoon More Pep (1936), harkens back to the Fleischer Studio's silent era Out of the Inkwell films. Like those earlier shorts, this film features animated characters interacting with the live action world around them and unleashing havoc upon it. This cartoon even features the same introduction as many entries in the earlier series. We start with a live action hand drawing a setting for our characters. Though Pudgy just appears on screen, Betty is first seen in a inkwell ala Koko the Clown. This film also seems to harken back to the sheer fast paced energy of the earlier Betty Boops. Many of these cartoons were slowing down by this point, but More Pep has well more pep. Even the cute pudgy can't slow down the action.


Up next is Tweety's first appearance in a cartoon, A Tale of Two Kitties (1942). Sharp eyed viewers may notice that Tweety is not yellow in this film, but pink. Since he was a newborn baby bird, it made sense for him not to have feathers. According to director Bob Clampett, he based the character off of a nude baby photo of himself. Tweety already has his famous line, "I Tawt I Taw a Puddy Tat." According to animation historian Jerry Beck's book, I Tawt I Taw a Puddy Tat: Fifty Years of Sylvester and Tweety, This line also originated with Bob Clampett when in the mid-1930's he wrote a letter to a friend on MGM stationary. Next to Leo the MGM lion, Clampett drew a small bird with a word balloon with "I think I taw a titty-tat." Instead of Sylvester Tweety is here pitted against two cats named Babbit and Catstello. As should be obvious by the names, these cats were a take off on the infamous comedy team Abbott and Costello, who had just made their movie debut just a couple years earlier in One Night in the Tropics (1940). The voice of Catstello was provided by the man of a thousand voices, Mel Blanc (who also voiced Tweety) and Babbitt was voiced by writer Tedd Pierce. A reviewer in Showman's Trade Review was very impressed with these voices stating, "Either the famous comedy pair furnished the accompanying dialogue themselves or the impersonators are the last word in perfection." Though they would not catch on the way Tweety did, these characters would reappear in other cartoons. Some of these cartoons would even feature the duo as mice instead of cats. They would appear with Tweety much later in a 1998 episode of the TV show, Sylvester and Tweety Mysteries. This cartoon was reissued to theaters in 1948, the year Abbott and Costello made their most popular movie, Abbott and Costello Meet Frankenstein (1948). 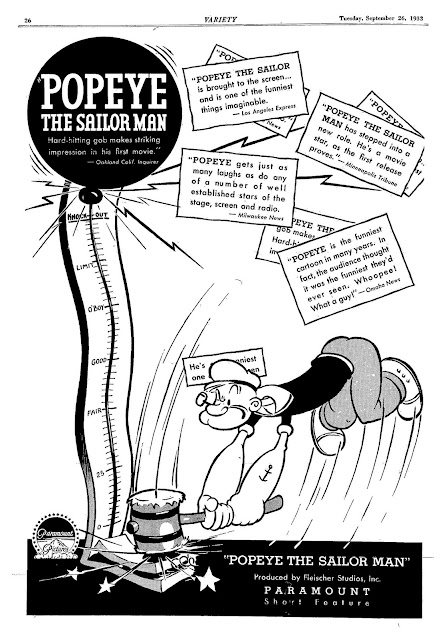 In the mid-1930's in order to compete with the more popular cartoon studios like Disney or Fleischer, the Van Beuren Studio hired one of Disney's top cartoon directors, Burt Gillett (of Three Little Pigs fame). The studio gave Burt Gillett control over the studio's output and this lead to brand new series and the dropping of established ones. One of these new series was the Rainbow Parade cartoons, which were a not too subtle attempt to recapture the popularity of Disney's Silly Symphonies. Unfortunately this was not to be too successful as the studio would close after RKO stopped distributing their cartoons after getting the rights to distribute Disney cartoons in 1936. Here is the first Rainbow Parade cartoon, Pastry Town Wedding (1934).

Before Woody Woodpecker the Walter Lantz studio created quite a few cartoon characters who are forgotten today. Here is one of those characters, Baby Faced Mouse in his first film, Cheese Nappers (1938).

Thanks for joining me come back next week for more animated classics. Until then may all your tunes be Looney and your melodies Merrie.