Movie Review: The Sword and the Scoob 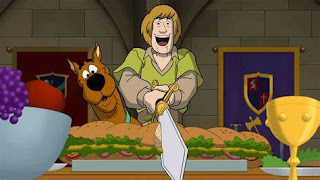 Note: This is a direct to video film.

While not the best Scooby-Doo! movie, this definitely a good one.

After some really disappointing recent Scooby movies lately (Return to Zombie Island, Curse of the 13th Ghost), it is good to see the franchise get back on track with a movie that while
nothing fantastic is thoroughly entertaining. The mystery here is a darn good one. It is solvable if you pay attention and try to figure out all the clues. Yet at the same it is never too obviously spelled out. A medieval setting proves prefect for the Scooby gang. Atmosphere has always been one of the most important parts of any Scooby outing and this movie definitely provides on this front. This is something that is especially true as we reach the climax in this movie (which takes place in an effectively creepy castle).  Morgan Le Fay proves to be an excellent villain. Like most of the best villains from this franchise she is quite creepy and threatening but never too scary to take away from the lighthearted fun. For fans of not just Scooby but all things pop culture, this film serves as a treasure trove of delightful references. From a Twilight Zone inspired opening to various references to Thundarr the Barbarian to a character named Mr. HB, this film will delight pop culture fans of all ages.

The largest problem with this movie is that it feels like it has to have constant jokes. While there are some quite funny jokes here, there are also quite a few that miss. If the film simply let itself have more of a breath between jokes then one feels that the comedy could have worked better. Sadly once again this film also seems to have characters become dumber for the sake of a joke and then bring them back to normal afterwards (this seems to be a fault with many recent Scooby-Doo! movies).

This may not be the original Zombie Island but it is certainly a vast improvement over Return to Zombie Island. While I doubt this will be many people's favorite Scooby movie, but I also feel that most Scooby fans will have a lot of fun watching this.
Posted by Michael J. Ruhland at 9:23 PM