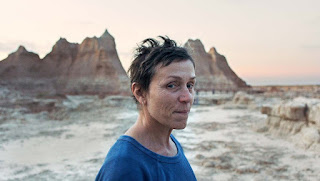 Note: I saw this film in a theater and it is so good to be back.

An incredibly moving and powerful experience.

With very few movies under her belt (including the must see The Rider (2017)), Chole Zhao has proven herself to be a director to look out for  and this film only furthers the reputation she has built up with movie lovers like us. She handles this movie perfectly. This movie perfectly transitions for joyful fun scenes to moments of pure loneliness and isolation. One moment our main character will be joking around and having fun and the next she will seem completely lost and aimless. The way this works so well is that even the happiest scenes of this film have a tinge of sadness behind them, as we can feel a sense of longing for something that is absent for her life. Yet this film has enough humor and fun at points to keep it from becoming depressing or hard to watch. Because of this we can truly say we enjoyed this movie as well as were moved by it and that is a sign of real art. Of course praise must also be given to Frances McDormand's incredible performance. No word can describe this performance better than real. The humanity and honesty behind her acting make every emotion incredibly powerful.

This film also benefits from a great soundtrack, that will delight many other country fans like me. I adored hearing such country greats as Lorretta Lynn, Kitty Wells, Lynn Anderson and Sons of the Pioneers (as well as some characters singing their own version of Willie Nelson's On the Road Again). The movie also has some beautiful scenery and cinematography (by Joshua James Richards).

This is simply a must see movie.
Posted by Michael J. Ruhland at 8:47 PM