Some Cartoons For Saturday Morning #114

Hello my friends and happy Saturday morning. Welcome back for another round of classic cartoons.

Today's selection begins with Sylvester and Tweety in Tweet Dreams (1959). This cartoon is what is often referred to as a cheater. This means that it uses clips from earlier cartoons. The cartoons which have clips used here include Sandy Claws (1954), Tweety's Circus (1955), A Street Cat Named Sylvester (1953), Gift Wrapped (1952) and Too Hop to Handle (1956). Another cheater cartoon, Freudy Cat (1964) uses a similar premise where Sylvester visits a psychist. I have always loved the ending joke of this film.

Next comes Disney's last Silly Symphony short, The Ugly Duckling (1939). The studio had already made this Hans Christian Anderson story into a Silly Symphony in 1931. However this version is more dramatic while the early version was more comedic. This wide different take on the source material fully justifies, the series returning to this story. Looking at this film, there is no doubt that the Silly Symphonies went out on a high note. The animation is fantastic even by Disney standards (animators include Eric Larson, Stan Quackenbush, Riley Thompson, Archie Robin, Milt Kahl and Paul Satterfeild). Comparing this to the earliest Symphonies shows how far Disney had come in the art of character animation. It is no wonder this won the "Best Cartoon" Oscar of 1939. Though originally playing in movie theatres this cartoon made a very early appearance on TV, when it played on an early variety show (May 1, 1940) celebrating the first anniversary of TV's first commercial appearance in New York. A review in Photoplay stated, "You'll choke with laughter and tears at the same time; gasp at the lovely color and settings. The Hans Christian Anderson story is followed closely except Disney improves on Anderson's very funny implication that the swan's egg in the duck's nest might lead Papa Duck to suspect his mate." A review in The Film Daily states. " Though the story only concerns the feathered folk this short is fused with real feels and pathos." 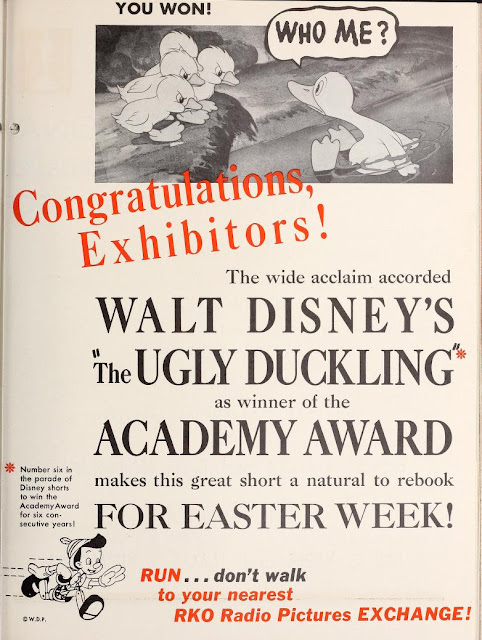 Next comes a classic Fleischer Popeye cartoon, I Never Changes My Altitude (1937). When movie magazines listed this cartoon they changed the name to the grammatically correct, "I Never Change My Altitude." The following is an exhibitor's review from the Motion Picture Herald, "I Never Change My Altitude: Popeye the Sailor - These Popeye cartoons are very good for the kids. This one did not go over with the adults. Running time , eight minutes, A.J. Inks, Crystal Theatre, Ligonier, Ind. Small Town Patronage." Another exhibitor's review for the Motion Picture Harald, disagreed with this stating, " I NEVER CHANGE MY ALTITUDE: Popeye the Sailor—A good Popeye. Adults will enjoy this as much as the kids. Running time, seven minutes.— A. E. Eliasen, Rialto Theatre, Paynesville, Minn. Rural and small town patronage."


Up next is a classic Daffy and Porky teaming, The Ducksters (1950). This cartoon features Daffy hosting a very sadistic radio game show with Porky as the contestant. Daffy is as much of a clear cut villain here as he would be in the later cartoons when he is up against Speedy Gonzales. However he is so energetic and fun to watch here that even those who hate his later more villainess roles will have fun watching this cartoon. This film would be reissued to theatres on June 18, 1961.

Next comes Cubby Bear in Croon Crazy (1933). The following is an exhibitor's review from Motion Picture Herald, "Croon Crazy: Cubby the Bear - Seldom is there a short nowadays that doesn't ring in the 'Come up and see me sometime' stuff. You wonder whether new expressions are not all washed up. Why not start something new. - Mrs. N. Monte Gill, Strand Theatre, Montpelier, Vt. General Patronage."

Up next is a Color Rhapsody cartoon from Columbia, The Herring Murder Mystery (1943). This is the only theatrical short directed by Dun Roman, who worked as a writer on other Columbia cartoons and would later work on Jay Ward's television cartoons. A reviewer for The Exhibitor wrote, "Technicolor, drawing and animation are all good but it isn't particularly funny." 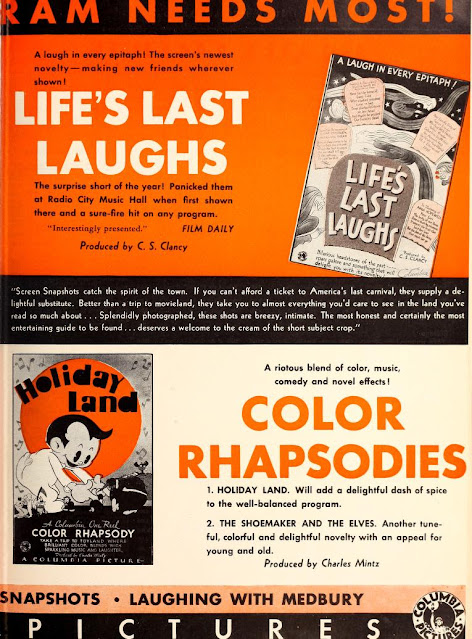 Today's cartoon selection ends with an oddball Disney short, Football Now and Then (1953). This cartoon was directed by Jack Kinney and it features much of the same mixture of clever satire and great cartoon slapstick as his Goofy shorts. Yet this film is much stranger than any of his Goofy cartoons. Though even a lot of major Disney fans are not familiar with this, those who know this cartoon all seem to have a fondness for it. So I hope you enjoy one of the silliest cartoons to come out of the Disney studio.

Thanks for joining me come back next week for another round of animated classics. Until then may all your tunes be looney and your melodies merry.