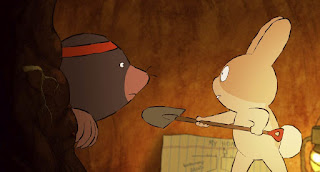 With this delightful short film, Pixar shows that it is just as good at creating 2D cartoons as their more traditionally 2D.

Like many of the best Pixar shorts this film relies on pantomime rather than dialogue. As someone who is a massive fan of silent film, it makes me very glad to see that this style of storytelling still lives on today. Despite featuring some charming visual humor, no one would ever accuse this cartoon of being laugh out loud hilarious. Instead most of the jokes simply raise a smile instead of an auditory laugh. Despite this the film successeds excellently in doing just what the medium of the short film does best. That is to tell a simple story simply. This film has no pretensions beyond being what it is, a charming little cartoon with a charming little story. As one should except from Pixar, the animation is handled excellently and though these characters may not talk they express everything we could want to know about them with simple gestures that work as a truly universal language. The story itself moves briskly but never feels rushed. The main character is very likable and relatable, something that adds much to the enjoyment of this film.

If you are a fan of Pixar or just cartoons in general this short is definitely worth a watch.
Posted by Michael J. Ruhland at 5:38 PM