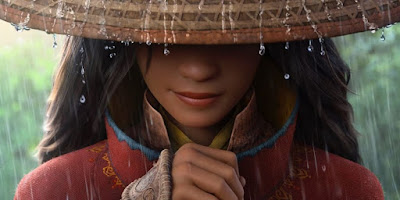 Note: I saw this film in a theater and it is so great to be back.

This may not be top tier Disney, but judged on its own merits it is pretty darn good.

I must get the most obvious thing to say out of the way first. This film looks fantastic. This is something that both people who like and dislike this movie would agree with. How could you not? The backgrounds are incredibly detailed and there is not a single moment in this film in which
is not simply breathtaking. Yet through the magic of Disney filmmaking the backgrounds do this without ever taking attention away from the film's focus, the characters in the foreground. This is something I never actively think about when watching an animated Disney movie but one I am always impressed by it when I think about it after leaving the theater. It shows the pure mastery of visual filmmaking that the animation studio has without ever showing off  or calling attention to itself. Having mentioned what happens in the foreground, this film has great action scenes that are incredibly exciting and a heck of a lot of fun to watch. These may in fact stand among Disney animation's finest action scenes. This movie makes you feel like you entered another world. While the art is a major reason for this, helping also is this film's use of mythology. The filmmakers create a world for the characters to live in which magical things are not only possible but accepted as fact and in the best fantasy tradition, this world feels real to us over the course of this movie. It is a place we can imagine ourselves going to and living in.

The characters themselves are definitely likable and relatable, even if they can be a bit underdeveloped. Because of this we connect and relate to them well enough to care about them and what happens to them throughout the film. At the same time they do not feel as real to us as some of Disney's best characters do.

Now for the faults of the film. The most troubling fault is in the dialogue. Often times the dialogue directly and plainly states what we have already seen or what we can easily infer. This can get a little repetitive and annoying. However this is not the major problem with the dialogue. This movie has a message about people coming together and seeing the good in one another. This is a good message but that doesn't mean the dialogue has to beat us over the head with it. The amount of times we are told the same basic message over and over again is simply way too many and the dialogue itself is too directly on the nose. This movie is also hampered by the fact that while it is very enjoyable it is also very familiar. It never truly finds its own separate identity for similar Disney films. Because of this it stands as a good movie, but also as just one of many of Disney's good movies.

This movie is accompained by a delightful animated short film, Us Again. This film is wordless and yet perfectly conveys a beautiful message and heartfelt real human emotion. This is Disney doing what Disney does best.