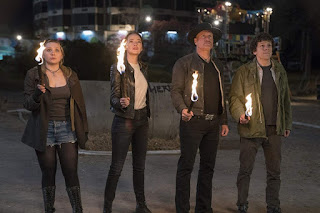 Hilarious sequel that had me laughing throughout the majority of the film.

Despite being a horror-comedy that has a lot of gory zombie killing, the majority of humor in this film is character based. This works especially well with all the interplay between Columbus and Tallahassee. These are characters that you wouldn't except to work together but they do perfectly. The chemistry between Woody Harrelson and Jesse Eisenberg is perfect and it appears that the two are simply having a blast working together. Every time these two shared the screen the movie shined comedically. There was also a great amount of heart in the two's scenes together, that brought a surprisingly warm sweetness to this zombie comedy (don't worry there is still plenty of crude jokes and gore). Who was also surprisingly hilarious in this movie is the stereotypically dumb blonde Madison. It would be easy to think that with how often this type of character has been used, there would nothing funny left to do with one. This movie proves that wrong as somehow she completely steals every scene she is in, causing some of the movie's biggest laughs. As a huge Elvis fan, all the scenes referencing the king especially stood out to me as very funny as well. As much as this is a comedy, it is also a zombie movie, and it works very well as this too. I story is quite good, and there is plenty of very fun action scenes here as well. As well as the characters being funny, I really cared about them as people. This helped tie the comedy, the horror and the drama together perfectly.

The only thing that really fell flat for me in this movie was what they did with Columbus and Wichita's relationship. This not only felt cliché but very forced and rather uninteresting. It did lead to the new character, Madison, so I guess we can still thank this misused plot device for that. That still doesn't make it work at all though.

This is excellent horror comedy and just a delight to watch.