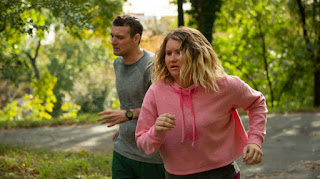 A likable film that is both darkly funny and heart warming.

The title gives away what type of movie this is. You know what is going to happen from the moment it starts. That however does not mean this is not a good film though. One thing I really appreciate about this movie is the portrait of our title character. We root for her, but still acknowledge as a person she is very faulted. The reason for this is that she is all too relatable. She is insecure and pushes everyone who shows her any love away. She doesn't love herself and therefore will let nobody else love her. We forgive her for the mean things she says, because we understand why she is saying them. Sometimes because of this the scenes when she says something mean can become a little hard to watch, because we all have said not nice things that we now wish we hadn't. This is all enhanced by simply a great performance by Jillian Bell, who adds to the humanity of the role. I also appreciate that this movie's message isn't just simply about reaching our goals but instead to make sure our priorities for why we are doing them is correct. This is highlighted as when we see Brittany both progress and regress as a person over the course of trying to achieve this goal. This is a nice addition to what is mostly a predictable story. Also helping is a smart and cynical sense of humor that often gets the laughs it desires easily (though the British accent thing can get a little annoying at times).

The romance however falls flat and feels like it is forced in because these movies typically have a romance. Not every film needs a romance and this one would have been better off without it.

All in all this is a well made feel good movie, despite its faults.