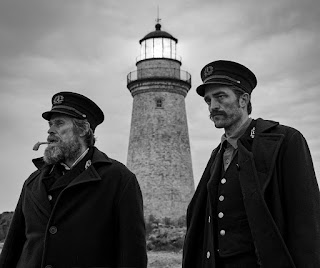 A brilliant work of cinematic art.

This film is not your average horror film abandoning cohesive story telling for the logic of a nightmare. Like a nightmare not everything may make logical sense but emotionally and atmospherically everything ties together perfectly. This is a movie that asks you to surrender yourself completely to its odd nonsensical world or else its power will be lost on you. If you surrender yourself though you'll find yourself in for a cinematic treat of the highest order. Much of this is due to Robert Egger's incredible direction and Jarin Blaschke's masterful use of black and white cinematography. The use of black and white in this movie never comes off as a gimmick. Instead being in black and white is a necessity for this movie to work as well as it does. This device gives it a more unreal and more dreamlike quality, that perfectly fits into the movie's illogic. Nothing in this movie is quite real, so the film looking real could hurt the illusion. This is also the fact that many of the film's shots are gorgeous and simply wouldn't be as visually memorable in color.

This film revolves around two men alone on an island. Because of this the film has to be held by two actors. In fact instead of an actress (Valeriia Karaman (this appears to be her only screen credit)) who receives very little screen time and no lines, these two actors are the only ones on screen for the whole movie. With this in mind, these actors need to turn in fantastic performances or the whole film would suffer greatly. Luckily William Defoe and Robert Pattison turn in incredible performances that bring out the deep humanity in these abstract characters. They pull us ever further into the incredible madness that is this film.

I don't want to give much more away as this is a film you have to experience for yourself and what happens in the movie cannot be effective in writing. Just know that this is a fantastic experience that is unlike any other film out there and is one of the best movies of this year.