Silent Film of the Month: Student of Prague (1926) 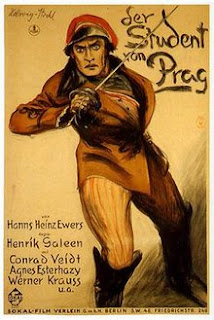 Happy October everybody. Of course with October comes Halloween and with Halloween comes spooky movies. Like I am sure many of my old movie fans would agree, some of my favorite horror movies are those made in Germany during the silent era. We all love and cherish Nosfertau and The Cabinet of Dr. Calligari however I also have a strong fondness for a lesser appericated movie, The Student of Prague.
Henrik Galeen, the director and writer of this film was no stranger to silent German horror. Before this he had directed the 1915 version of The Golem and served as a writer for the 1920 version of The Golem,  as well as the infamous Nosferatu. There is no doubt he had a special talent for this type of film and that is completely on display in this movie.

In this film Bauldin (Conrad Veidt) is the greatest fencer in Prague. This gives him a certain notoriety. Despite this he is unhappy. He is very poor, which makes him think much less of himself. Despite his attraction to the beautiful Liduschka (Elizza La Porta), he feels being penniless, he is unworthy of her love. One day Bauldin meets a strange man named Scapinelli (Werner Krauss) who offers Bauldin riches in exchange for his choice of any of the poor student's possessions. Bauldin falls for this and agrees. However Scapinelli surprises Bauldin by taking the student's reflection in the mirror. At first Bauldin enjoys his wealth, until he learns the full horrors of the exchange.

This is a masterfully made movie. Of course being part of the German expressionist movement this is a stunning film. Though this movie mostly exists in cheap public domain prints, even this can't hide how great this film looks. Some moments are completely jaw dropping. The scene with Scapinelli on top of the mountain is breathtaking and an image that will stick in your mind long after the movie is done. If there are any complaints to make about this film they are that it can be slow paced and can focus too much on the romance instead of the horror. Neither of these are in any way true about the climax of this film. This is one of the most exciting climaxes in the whole German expressionist movement. While many old horror films are simply not scary to modern audiences, this sequence is still extremely creepy and tense. I would dare to call this the scariest moment in silent cinema. The last image of this scene is incredible and will stay in your mind long after the film is finished. Though parts of this movie can be slow, even these scenes work extremely well due to great cinematography and lighting as well as an incredible performance from Conard Veidt. He gives this film such a sense of human frailty that the film achieves a sense of uneasiness even when not much is happening.

I don't know why this film never gets the recognition from silent film fans that it so rightful deserves. It is a fantastic film.


It is a remake of a 1913 film with the same title that is also quite good. You can watch that movie below.