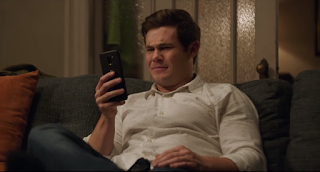 A comedy that doesn't produce one single laugh.

There is not one joke in this movie that does not feel completely forced and phoned in (pun intended). For an idea that could have a produced a very original comedy, this film seems to go for the most lazy humor possible. The humor is completely of the dumb mindless variety. However what too many filmmakers don't understand is that dumb humor requires just as much effort as clever humor does to work. For instance look at a Three Stooges film. While no one would accuse those films of being high art, there is no denying all the work and effort put in to make each of those jokes as funny as can be. Those jokes are so perfectly executed and thought out that even though they may not be "intelligent" humor they never fail to make me and many others laugh. This film seems to think a joke being dumb is funny enough. This is never more clear than the scenes involving our protagonist's boss. Though Michael Peña puts forth a lot of energy in this role, he can't save poorly thought out and executed jokes, that end up making this part of the film embarrassing to watch.

This movie does try to insert some social commentary on the addiction people today have to their phones. The thing is we all know that there are too many people today who are too addicted to their phones  and spend more time on them than actually out doing stuff. This movie has little to say that we haven't heard a million times and therefore this commentary becomes pointless and will mean little to anyone. There are many movies that address this in a more intelligent way, a more entertaining way or both.

The only thing that kind of works in this film is the romance between our protagonist (Adam Devine) and his human girlfriend (Alexandra Shipp). The two have quite good chemistry and are kind of charming to see on screen together. There is no doubt that these scenes are as cliché as they come and all the humor still falls completely flat, but this is the only part of this movie that provided me with anything to like or care about. If this movie focused on the romance instead of the phone commentary and horrible humor, it wouldn't have been a great movie, but it might have worked. However that was not the movie we got and this film still stands as a horrible comedy and social commentary.