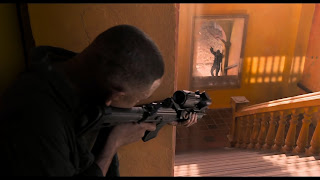 The protagonist of this movie is very much what you except from a character played by Will Smith. Meaning he is very likable, but without much depth. However for an action movie like this likability is the most important thing in a character. If we can root for him than the action becomes much more exciting because we don't want to see him die. Speaking of action scenes, the ones in this movie are fantastic. Too often longer action scenes can start me to have to force myself to pay attention. That never happened here at all. The action was perfectly shot and paced as well as being able to keep an emotional connection throughout. The action is often times very over the top. However that is not only par for the course for a film like this it is also part of the fun. After all who going to this movie isn't partially there to see Will Smith fight Will Smith. It is easy to call that a gimmick, but it was a gimmick I and many more people will enjoy watching.

The storyline offers nothing new, and it is hard to call anything that happens surprising. However for what it is the story is, it is well told with some well written dialogue and believable character moments. I may have seen much of this before, but I was still heavily engaged.

This movie has some of the best use of 3-D I have ever seen. Most of the time when I see a movie in 3D, the experience is more than a little underwhelming. The 3D adding little more than a few gimmicky moments, if that. I have often because of this written 3D itself off as a cheap gimmick. However the motorcycle chase scene in this film has made me a believer. Similarly this film makes you realize how far technology has come in similar ways. To see how the made Will Smith look 30 years younger is incredible and could not have been done just a few years ago. As he so often does Ang Lee is breaking new ground visually in this film.

Don't except anything original story wise. Just go for fun and I am sure you will enjoy yourself.