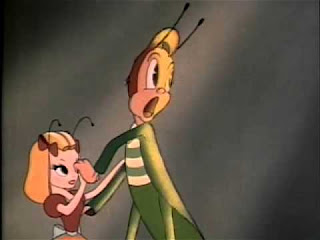 The second and last animated feature from the Fleischer Brothers Studio, Mr. Bug Goes to Town (1941) is a delightful film that too often does not receive the attention it deserves. Many critics, historians and animation fans have written that the film pales in comparison to the Disney animated features of the same era. This may be true but why compare them in the first place? There is a place for both the famous Disney movies and a very fun little movie like this.

Being a fan of this movie it was interesting to find the following article from Showmen's Trade Review (dated January 10, 1942).

"'Mr. Bug' Previewed for Key City Kiddies"Something new in movie preview audiences was established during the holiday season when Paramount showed 'Mr. Bug Goes to Town,' its new full-length Technicolor cartoon feature from Fleischer Studios to selected groups of children in a number of large cities. Thousands of youngsters, chosen from among theatre official's and newspapermen's children, members of boys clubs, orphanages and settlement houses saw the screen's first cartoon feature with a present day metropolitan theme, at special screenings several weeks in advance of its showing at their local theatre.

"Largest of the showings took place at Pittsburg, at the Sehenley Theatre, for an audience of orphans and settlement house kids; and in New Haven, at the Paramount Theatre when the New Haven Register played hosts to guests from local orphanages, young tenants of New Haven housing projects and members of boy's clubs and newsboy's groups. Each of these two showings drew an audience of 1,500.

"Paramount and Warner Brothers were joint hosts to 500 orphans at the Uptown Theatre in Philadelphia, and again at a showing for children of film exhibitors and newspaper men at the Delaware Theatre, Albany. In Boston the Herald and American newspapers sponsored a screening at the Fenway Theatre on the day before Christmas for guests from Hub settlement houses and the Burroughs Newsboys' Foundation, a famous Boston boy's organization. Six hundred attended the Fenway Party.

"The Herald-American of Chicago backed a screening at the Esquire Theatre in which in that city that was attended exhibitor's children, newsboys and underprivileged youngsters numbering 1,200. Paramount showed 'Mr. Bug Goes to Town' at the Colony theatre in Cleveland to an audience of 1,100, made up of representatives of all the Cleveland orphanages, the Cleveland News Air Cadets and children of the local newspaper, radio and theatre world Similar showings took place in Milwaukee and Minneapolis, with children of newspaper men and motion picture sales executives as guests."