Some Cartoons For Saturday Morning #123

Hello my friends and happy Saturday Morning. Once again it is time for more classic cartoons.

Today cartoon selection starts off with a real treat. Here are some commercials created for TV's The Bugs Bunny Show. The following is from a 1960 issue of TV Radio Mirror. "Behind the scenes at ABC there is ecstasy, over of all things, the new Bugs Bunny Show, which premieres October 11th at 7:30pm. 'The Bugs Bunny series' whispered one confidante, looks like the best of all the new stuff.' Doing all the voices is one comedy genius named Mel Blanc, who has long been doing Bugs and a million other voices and making about a million at it too. He says, 'The easiest money was maybe the $800 I got paid for doing a cats Hiccough for the picture 'Pinocchio.'" Mel even makes that horrible sound which represents Jack Benny's old Maxwell. During this season Mel will also be heard weekly as Barney Rubble on The Flintstones and as usual will make frequent appearances with Jack Benny in character parts. He says 'People don't believe who I am so I have to run around saying, 'What's Up Doc?' But the most gratifying thing happened to me last season when I played a drunk on Benny's show and got laughs without making a sound.'"

Just as The Pink Panther cartoons came out of the animated opening credits for Blake Edwards' feature length movie, The Pink Panther (1963), The Inspector cartoons came out of the opening credits for its sequel A Shot in the Dark (1964). As that movie no longer featured The Pink Panther diamond, an animated cartoon opening based around an animated inspector (since the series starred an inept police inspector) was created. Though that animated version of the inspector looked a bit different there is no doubt that he is the same inspector we see in the cartoon series. Also as The Pink Panther cartoons used the theme music from the first movie so did The Inspector cartoons use the theme music from A Shot in the Dark (both themes were composed by Henry Mancini). Though all of Blake Edwards further feature length movies of the series used the Pink Panther for their opening credits, The Inspector would appear in the opening credits of director Bud Yorkin's feature length take on the series, Inspector Clouseau (1968) and there he was very much the way we see him in the short cartoons. What is interesting about the Inspector shorts is that while they are somewhat based on the character of Clouseau from the Blake Edwards movies, the two characters are not the same and it never feels like the makers of these shorts were ever trying to copy the features in any way. The Inspector series was an excellent cartoon series and unlike many other series of theatrical shorts, these cartoons went out on a high note. The final Inspector cartoon was the excellent Carte Blanched (1969).

Now we come to a short starring the first star of the Looney Tunes cartoons, Bosko. This movie, Bosko's Holiday (1931), was the first to feature Bosko's name in the title and all the following (with the exception of The Tree's Knee's (1931)), all the Looney Tunes starring Bosko would follow suit. Watching this movie, you will probably feel that it more closely resembles an early Disney cartoon than a later Looney Tune and that was true of all the Warner Brothers cartoons of this era. In his landmark book Of Mice and Magic: A History of the American Animated Cartoon, film historian Leonard Maltin quotes animator Jack Zander, "We were doing something and Hugh Harman [who co-directed the early Warner Brothers cartoons with Rudolf Ising] said 'You remember that scene in the Disney picture where Mickey Mouse did do-and-so?' I said 'You want me to do almost the same thing?' and he said 'No I want you to do exactly the same thing.'" 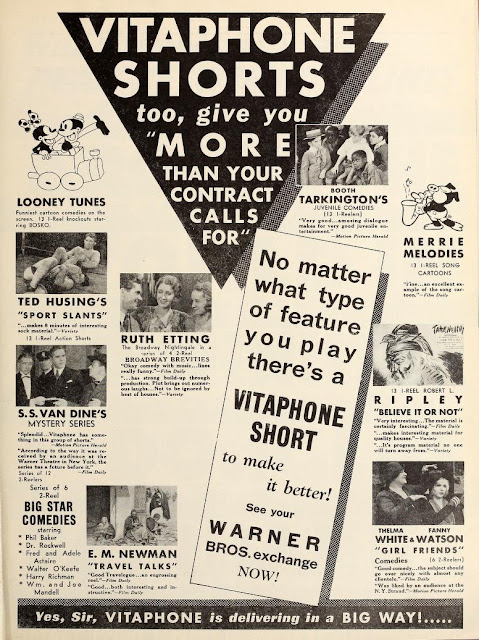 Now comes a Terrytoon starring everybody's favorite Dinky Duck, Dinky Finds a Home (1946). A review in Showman's Trade Review referred to this cartoon as "a nice Technicolor subject and especially good for the children." Despite Dinky being a boy a review in Motion Picture Daily refers to Dinky as female stating, "The little black duckling and her adventures in a hen house provide the plot for this Terrytoon." Reviews in Showman's Trade Review and Motion Picture Herald got Dinky's gender right however. 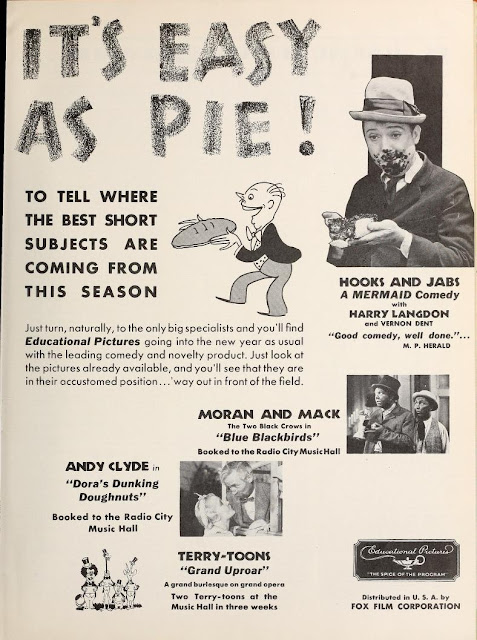 Up next is the first Mickey Mouse cartoon made, Plane Crazy (1928). This was back in the days when Mickey was still a simple country mouse who went around barefoot and didn't wear gloves. These early Mickey cartoons have a genuine rural feel to them (partly because Walt always considered himself a farm boy at heart) that I personally find irresistible and definitely prefer over the later and bland suburban settings featured in his later cartoons. In this movie Mickey dreams of being a pilot and makes himself a homemade plane that would make the Our Gang kids jealous. This is because aviation was a popular topic around this time due to the fame of Charles Lindbergh (briefly caricatured in this movie) after his New York to Paris flight of 1927. Walt had already had his earlier star, Oswald the Lucky Rabbit in an aviation themed cartoon with The Ocean Hop (1927). This cartoon began production in March, 1928. The production of this cartoon was done in secret due to the fact that Walt was still under contract to make Oswald cartoons for Universal. Animator Ub Iwerks (who animated the film by himself) was separated from the artists working on the Oswald shorts so that he could not be seen by them. Hugh Harman later described this saying, "They curtained off part of the studio with a great black drop, black skirm of some kind, so that I and a few others who were leaving couldn't see the great secret that was going on." Ub Iwerks was one of the fastest animators of the time and finished this cartoon in only a matter of weeks. It has been said that he made as many as 700 drawings in one day. This movie was originally made as a silent film, yet you will notice the opening title card says "Sound Cartoon." The reason for this is that after the success of Steamboat Willie (1928) with sound, a soundtrack was added to this cartoon. 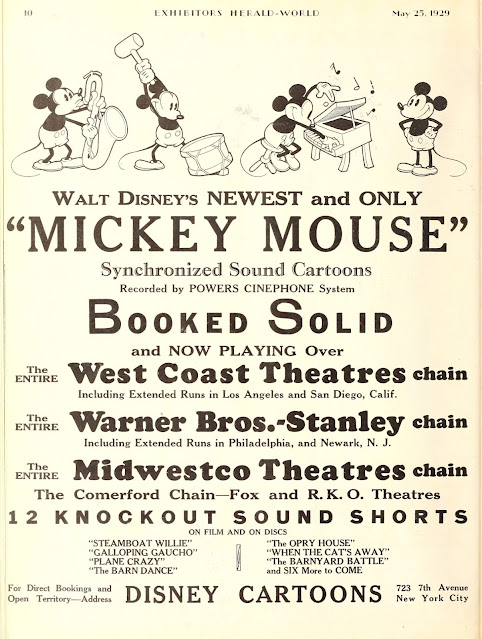 Before Pluto received his own cartoon series he made a couple short films without Mickey that were released as Silly Symphonies. These were Just Dogs (1932) and Mother Pluto (1936). Up next is the first of these, Just Dogs. In this movie, the animation of Pluto is mostly split between two animators, Norm Ferguson and Tom Palmer. However Les Clark animates a brief scene were Pluto and the little pup hide in a barrel and Dick Lundy animates them digging up the bone. The pup Pluto costars with did not appear in any other animated cartoons, but Floyd Gottfredson would use him in the Mickey Mouse newspaper comic strip. A song used early on in this movie is Guy Massey's The Prisoners' Song. This song was prominently used in the Mickey Mouse cartoon, The Chain Gang (1930), which many people believe is the first appearance of Pluto. A review in Motion Picture Reviews stated, "Amusing for Children but not up to the usual Disney standard." A review in The Film Daily disagreed stating, "Right up to the standard of the Walt Disney shops [sic]" The following are two exhibitor's reviews from The Motion Picture Herald, "JUST DOGS: Silly Symphony—This is a fairly s:ood cartoon comedy but still no better than some of the others. United Artists should produce better cartoons or cut the price of these cartoons. Here's hoping to get better cartoons in the future from United Artists. Running time 9 minutes. -J.J. Medford, Orpheum Theatre, N.C. General Patronage." " JUST DOGS: Silly Symphony—Didn't think that this was any too good. - Mayme P. Musselman, Princess Theatre, Lincoln, Kansas, Small Town Patronage." Working titles for this movie were The Dog Pound and The Dog Symphony.

Thanks for joining me come back next week for more animated treasures. Until then may all your tunes be looney and your melodies merry.

Walt Disney's Mickey Mouse: The Ultimate History by J.B. Kaufman and David Gerstein
Walt Disney's Silly Symphonies: A Companion to the Classic Cartoon Series by Russell Merritt and J.B. Kaufman
Of Mice and Magic: A History of the American Animated Cartoon by Leonard Maltin
Hollywood Cartoons: American Animation in its Golden Age by Michael Barrier