Some Cartoons For Saturday Morning #124

One thing I have always loved about DePatie-Freleng Inspector cartoons is the wide variety of strange and creative villains, our hero finds himself up against. One time villains in this series prove to be just as memorable as the regular characters. Case in point here is Canadian Can-Can (1967).

Chess-Nuts (1932) has everything I love about the early Betty Boop cartoons. In other words it is absolutely insane. In the style of the Fleischer Studio's earlier Out of the Inkwell shorts, this film starts off in live action before our cartoon heroes take over. In typical Fleischer fashion this is done to surreal and very funny effect. As the movie goes along, it only gets more surreal and funnier. This cartoon was made during the pre-code era and the short could not make this more obvious (if you don't know what pre-code means click here). Betty's dress comes off multiple times and it is obvious that the evil king is only interested in one thing. The following is an exhibitor's review (for Betty Boop cartoons as a whole) from the Motion Picture Herald. "Betty Boop Cartoons: I believe these cartoons are getting better all the time. My Patrons like them better than Mickey Mouse and I am running them both. The sound on these cartoons is wonderful and the cartoon is original and clever. Get the Betty Boop and Bimbo buttons and give them to the kids. The Bimbo and Betty Boop dolls are clever and worth the price for advertising. -S.H. Rich, Rich Theatre, Montpelier, Idaho. Town and rural Patronage." 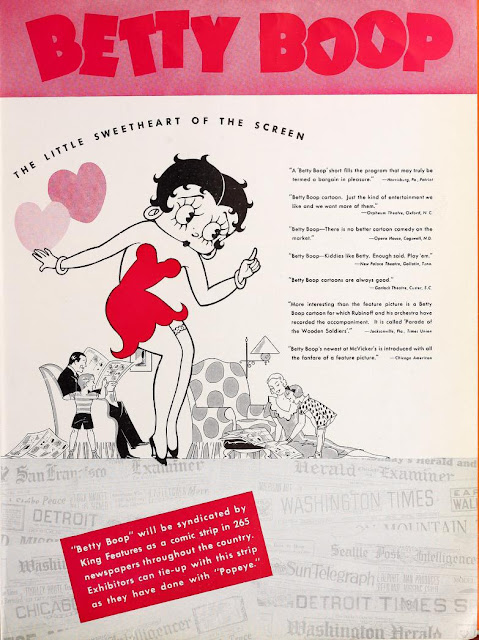 
Some of Disney's best and funniest cartoon shorts are those that teamed Mickey, Donald and Goofy as a comedy trio. Next up I have the second of these cartoons and the first one in color, Mickey's Fire Brigade (1935). This movie opens with the title card burning away in flames, a creative touch by effects animator Cy Young. In this short Mickey is the fire chief, a role he had played earlier in The Fire Fighters (1930). Two of the animators on this film are Bill Tytla (possibly my favorite Disney animator) and Grim Natwick, both of whom had joined the studio in 1934. They animate the majority of the scenes with Clarabella Cow. The scene where Goofy tries to take a coffee break is animated by Wolfgang “Woolie” Reitherman, who would later become a specialist at animating the character. Jack Kinney, who would go on to direct some of the funniest cartoons to ever come out of the Disney studio, animated Donald's struggles with flypaper and pails of water. It is common for cartoon fans to think of the old Disney shorts as being slow moving and sentimental, however that is not the case here at all. This is a fast moving and very funny film that puts a smile on my face every time. The following is from an issue of The film Daily (dated Sept. 5, 1935), " 'Mickey's Fire Brigade,' is to have its premiere in the New York theatrical sector this evening when it opens at the Rivoli Theater with the new Samuel Goldwyn production, 'The Dark Angel.'" A review in National Board of Review Magazine stated, "Noisier and less clever than most of this series but still better than most of its kind." A review in The Film Daily states, "This is one of the liveliest and funniest of the Walt Disney cartoon creations." The following is an exhibitor's review from The Motion Picture Herald, "MICKEY'S FIRE BRIGADE: Mickey Mouse—One of the best of the Mickey Mouse series. Running time, eight minutes.—M. H. Harrington, Avalon Theatre, Clatskanie, Ore. Small Town and Rural Patronage."

Now to go to a much earlier Looney Tune, up next is Bosko's Store (1932). Bosko was the first major Looney Tune character and he was created by Hugh Harman and Rudolf Ising. Learning for their former boss Walt Disney not owning the rights to Oswald the Lucky Rabbit, they kept the rights to Bosko. So when in 1933, they left the Warner Brothers Studio, Bosko no longer could appear in the Looney Tunes cartoons. Harman and Ising would make a few more Bosko cartoons for MGM though. Despite this Bosko would later make apperances in Looney Tunes media with the TV show, Tiny Tunes Adventures and the feature length Space Jam (1996). The following is a review from The Film Daily, "A thoroughly entertaining animated cartoon number. Shows Bosko at work in a grocery store, where he performs various amusing antics in slicing boloney and doing other chores around the shop. Lively and tuneful."


Next comes a delightful Terry-Toon, A Hare-Breadth Finish (1957). This short is a take-off on the story of the tortoise and the hare, but more than that it bares a quite close resemblance to Warner Brothers' Bugs vs. Cecil Turtle cartoons. Some of these jokes are very similar to those used in the pre-mentioned Warners cartoons, especially the last two jokes. The hare's personality here is also quite similar to that of Bugs Bunny in those cartoons. One of the best bits of animation here is the tortoise in Hawaiian get-up, this gag was animated hilariously by Jim Tyler. In my opinion this is one of the best Terry-Toons from this time period.

One of my favorite parts of the Garfield and Friends TV show is the Garfield quickies. These short skits were taken directly from Jim Davis' newspaper comic strip.


Thanks for joining me come back next week for more animated treasures. Until then may all your tunes be looney and your melodies merry.