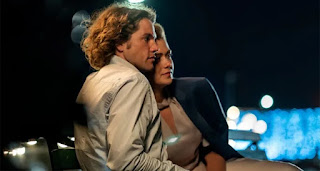 A charming and fun romantic comedy, if one that is extremely familiar.

Finding You is like a Hallmark movie but on the big screen (and characters drink tea instead of Folders coffee). Like a Hallmark movie it is nothing that I would proclaim as a great movie or one that will leave a big impact on me, but it is one that I truly enjoy watching. The storyline is basic and follows all the conventions of this type of movie. There is a misunderstanding, a romance between two characters that at first don't like each other, characters are looking to find more meaning in their lives and do and a lesson about truly living life. In many ways these are checkboxes that the movie fills out and leave everyone in the audience knowing what will happen next. However clichés are clichés for a reason and that is because they work and they work here. While I did feel some clichés were too drawn out and left me waiting for the obvious next step in that storyline (plus the movie had too many "endings"). Yet I still found myself really enjoying watching the film. The two romantic leads are very likable and the chemistry between  Jedidiah Goodacre and Rose Reid is fantastic. The best emotional scenes take place between our young couple and an old lady (Vanessa Redgrave) who has become an outcast in a small town where rumors travel fast. These scenes are surprisingly touching and were my favorite part of the movie. Another supporting character who stole the show whenever on screen was an Irish fiddle player (Patrick Bergin), whose scenes were quite charming. The humor in this movie is also surprisingly good and while I didn't laugh through the whole film, I definitely laughed more than a thought I would. The main character's self-proclaimed "little Sister" (Saoirse-Monica Jackson) provides the film with its funniest scenes and is just another supporting character who steals the show. Unfortunately the male lead's father (Tom Everett Scott) and co-star (Katherine McNamara) are simply clichés of movie characters and feel like nothing more than obstacles for our lovers.

All in all this is a charming and fun romantic comedy, but it is also nothing you haven't seen a million times before.