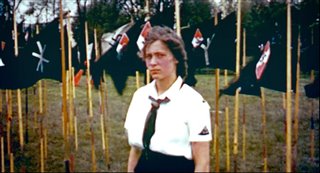 An important, startling and powerful documentary that will leave a huge effect on all those who watch it.

Two questions that come to the mind of anyone who has ever read a history book is how the horrors of Nazi Germany could have ever took place and how the German people could allow it. While these questions can never have the full answers they deserve this movie gives incredible insight. In this the last film for documentary filmmaker Luke Holland, Holland speaks with the last surviving generation of those who lived in Nazi Germany. While many of us would like to think of all those who either subscribed to Nazi ideology or did not stand up to it as something inhuman, this documentary shows us something much more terrifying. What we see here is people who are just as human as anyone we might meet on the street. Some were products of a society that raised, molded and brainwashed them into believing whatever they were told to believe in. Others knew the horrors going on, but felt powerless and helpless to stand up to them, or feared for their lives if they dare say something against the party. Multiple of the people interviewed said that everyone knew of the horrors but no one said anything not in secret. Many of us like to think that if we were there we have done something but watching this movie makes us question whether we really would have or if we would have been just like the people depicted here. The fact that we will never know the answer to what we'd do is absolutely terrifying. This question is what makes this film feel much more personal and moving than so many other World War 2 documentaries.

It is also fascinating to see how differently the interviewees react to their past. Some are very regretful and are horrified by the part they played in this great evil, while others are still in complete denial.

This movie being the last effort from director Luke Holland, it is also a very personal one. Holland was the son of a Jewish refugee from Vienna and had ancestors who were murdered by Nazi Germany. These interviews and research for this movie were made over the last decade as he felt this was a story that needed to be told. The result is a powerful movie that left me extremely affected by what I just saw and with a lot on my mind.
Posted by Michael J. Ruhland at 9:18 PM