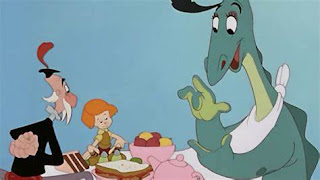 While it is not your typical Disney movie by any means, The Reluctant Dragon (1941) is a delight for film buffs. The movie features comedian Robert Benchley getting a live action tour of the Disney studio and he and we are treated to some great Disney cartoons (which were new to this film) along the way. While the cartoons are top notch Disney in every way, the highlight of this film for many movie buffs is the presence of artwork for Peter Pan (1953) , and Lady and the Tramp (1955) in the background, as well as live action appearances by animation legends Ward Kimball, Norm Ferguson, Clearance Nash, Fred Moore, James MacDonald and many more (including Walt himself). Considering how long it would be until these films were released, this gives a great insight into how long these ideas were in the heads of those working at the Disney studios.

Movie theatre owners used to go all out to advertise films. This is shown in the following from an issue of Showman's Trade Review (dated July 26, 1941).

"Manager Vic Meyer of the Orpheum Theatre, centered his campaign on The Reluctant Dragon, around Baby Weems, with the highlight event a Weems contest in which a search was made for the brightest youngster. A baby defense bond was awarded to four-year-old Jack Spindler and the youngster was host to some five hundred orphans at a matinee party. The stunt was broadcast and given wide publicity in local newspaper.

"Meyer also arranged a coloring contest with passes going to the kids who did the best coloring of a daffy dragons. Five thousand copies a Baby Weems puzzle were distributed. A milk and ice-cream tie-up netted several thousand throwaways with copy featuring sayings by Baby Weems.

"Another phase of the Orpheum campaign was a hook up with McCory's Department store. Three Thousand music wrappers with copy playing up the hit tunes of the production were distributed."

The following is from an issue of The Motion Picture Herald (Dated September 13, 1941).

"Ahead of 'The Reluctant Dragon' at the Hollywood Theatre, in LaCrosse, Wis., Hank Howard through tieup with baby apparel shop distributed heralds with blue imprint of baby footsteps, supposedly those of Baby Weems. Space was provided for footprints of local infants, those coming closest to Weems receiving promoted gifts."

The following comes from an issue of The Motion Picture Herald (dated December 6, 1941).

"To attract his juvenile patronage to his date on 'The Reluctant Dragon,' Stan Andrews at the Royal Theatre, in Guelph, Ontario, distributed blotters with copy reading, 'Hey, kids, Look.' This was followed by picture title, playdates and cut of the dragon. In addition, tinted heralds were also distributed."