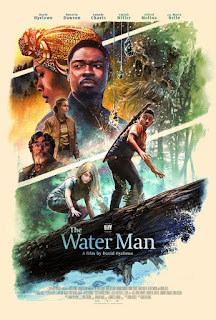 A top notch family movie in every way.

One of the most amazing things about this movie is how well it ties together fantasy and real life. The story involves a young boy (Lonnie Chavis) whose mother (Rosario Dawson) has leukemia. When he learns a folktale involving a man who has discovered the secret to immortality, he sets out to search for him to heal his mom. This film's since of real life drama keeps what is very much a fantasy movie into something that feels real and relatable. The character's basic incentive is one that all of us can relate to. Many of us have seen love ones in spots where we knew they might not make it out of. How many of us if we believed it could heal that person would go on a dangerous journey to save them? Also heightening the drama is the boy's relationship with his father (David Oyelowo (This was also his directorial debut)). His father is a Marnie, who is often away from home. While the two clearly love each other, they have no idea how to connect to the other. This is a situation not to often handled in family movies like this, but one that certainly leaves an emotion impact. Along his journey he strikes a friendship with a girl named Jo (Amiah Miller). This friendship is also very well done, as Jo evolves from using the kid to truly caring about him. This is never done in a forced or cloying way but in a way that seems completely believable. Most of all though when it comes to the emotional center of the film, the movie never talks down to its audience and treats the kids in the audience like grownups, while making the grown ups forget that they are not the only audience.  The fantasy elements themselves are fantastic. The woods are incredibly atmospheric. They are equal parts creepy (without ever being too scary for a young audience) and completely magical. Scenes like the snow falling in the middle of the forest will stay in one's mind long after the movie is finished. This fantasy world becomes just as real and believable to us as the scenes dealing with real life problems and relationships.

It has been said that some movies work on two levels, one for the adults and one for the kids. This film does much better than that. This movie is so smart, mature and direct that it appeals to adults and kids on the same deep level. Simply put this is a must see.
Posted by Michael J. Ruhland at 8:42 PM