Some Cartoons For Saturday Morning #122

Hello my friends and happy Saturday morning, once again it is time for some classic cartoons.

We start today's cartoon selection off with an early Pink Panther short (the second one in fact), Pink Pajamas (1964). This cartoon was directed by Friz Freleng and co-directed by Hawley Pratt. As these cartoons were made by the Depatie-Freleng studio, Friz produced ever classic Pink Panther cartoon. Though he directed many of the early shorts in the series, after 1965, he would step down from the director's chair. I personally find this disappointing as Friz's Pink Panther cartoons are especially good. Case in point, the following film.

Now we turn from an early Pink Panther to an early Porky Pig, Boom Boom (1936). This movie is very similar to an earlier Looney Tunes cartoon, Bosko the Doughboy (1931), which in turn is quite similar to Disney's Oswald cartoon, Great Guns (1927). The film is directed by Jack King, who after his stint at Warner Brothers would direct some of the best Donald Duck cartoons at Disney. Porky here is not yet voiced by Mel Blanc but instead by Joe Dougherty. Joe was the original voice for Porky and unlike Mel he really stuttered. Unfortunately his stuttering caused real problems with the filmmakers because of how much time it took and he would later be replaced in the part by Mel Blanc. However Porky is not the main star of this movie. Our hero is instead Beans the cat. Beans first appeared in the same cartoon as Porky, Friz Freleng's I Haven't Got a Hat (1935). Jack King clearly preferred Beans over Porky and gave Beans the main role in most of his cartoons around this time period. Sometimes Porky just had a cameo and sometimes didn't appear at all. This is the first time, Porky received a decent size role in a Jack King cartoon. Later when Porky's popularity clearly eclipsed that of Beans, Jack King would make cartoons starring Porky. Beans here is voiced by Tommy Bond, who many of you may know for playing Butch in the Our Gang films.

It is hard to understand just how popular Charlie Chaplin was in the 1910's. While he was not the first movie comedian by any means, his popularity eclipsed anyone who came before. He quickly became known as the funniest man in the world, and was equally loved by average audiences and intellectuals. They say that imitation is the best form of flattery and if this is true than Charlie was extremely flattered. Comedians like Billy West made a career out of copying Charlie Chaplin. It is no surprise that creators of cartoons would want to have their own little piece of the Chaplin pie. Pat Sullivan and Otto Messmer (known for the silent Felix the Cat cartoons) made a series of cartoons starring Charlie's little tramp. This series was not done without permission from Charlie Chaplin himself. In fact Charlie encouraged this films and considered them a good advertisement for his own movies. He would even send autographed stills to the makers of these cartoons featuring him in various poses. Up next is one of these cartoons, Charley on the Farm (1919). This movie reuses a few gags from the actual Charlie Chaplin film, The Tramp (1915). I find it strange that Charlie's first name is spelled Charley in the cartoon's title.

Next we join Popeye for Crystal Brawl (1957). This cartoon is what is often referred to as a cheater. In other words it reuses clips from previous cartoons. The shorts which have scenes repeated here are Alpine for You (1951) and Quick on the Vigor (1950).

During World War 2, Mickey Mouse had mostly been absent from movie screens, as the Disney shorts would be taken over by Donald and Goofy. Because of this Squatter's Rights (1946) is in many ways a return to the screen for Mickey. In this movie Mickey and Pluto face off against a couple of chipmunks. These chipmunks had first appeared on movie screens in Private Pluto (1943). Though they are still nameless at this point, they would later become Donald Duck's nemeses Chip and Dale. The majority of the Mouse's animation in this film was handled by Paul Murray. This was the only time he was the lead animator on a Mickey film and many Disney fans know him best for his work in the studio's comic books. However the climax has the mouse animated by Marvin Woodward instead (who was a very experienced Mickey animator). The movie also reuses animation from the earlier short, The Pointer (1939). 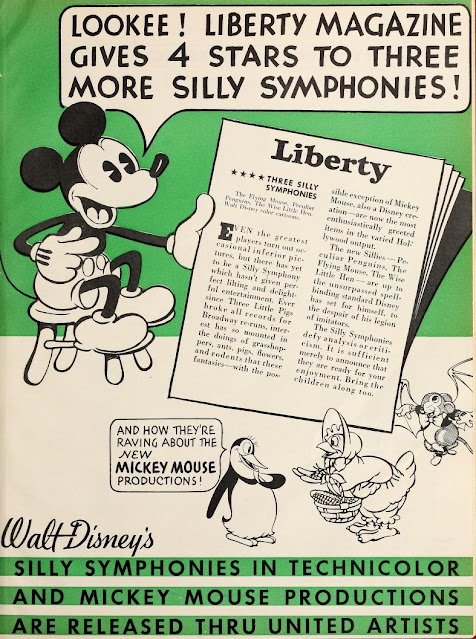 
Up next is one of Ub Iwerks' Willie Whopper cartoons, Robin Hood Jr. (1934). Following are two exhibitor's reviews from the Motion Picture Herald. "ROBIN HOOD, JR.: Willie Whopper—This is only fair entertainment and not as good as the last issue of this series. These are not as good as the Flip cartoons of last year and here's hoping the Metro will improve them or discontinue producing them. Running time, nine minutes. - J.J. Medford, Orpheum Theatre, Oxford, N.C., General Patronage." "ROBIN HOOD JR.: Willie Whopper Cartoon - Good cartoon. The kids ate it up. Couldn't get them out after the first show as they all had to see it the second time. Personally I didn't think too much of it. Running time 20 minutes [I would guess that the writer messed up with this run time]. J.E. Ross Jr. Strand Theatre, St. George, S.C., Small Town Patronage." 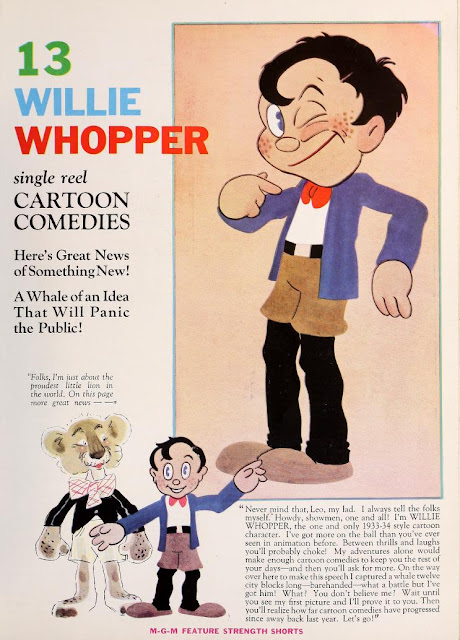 Today's cartoon selection ends with a real classic, Falling Hare (1943). This cartoon features one of the few characters to get the upper hand of Bugs, the gremlin. Despite only appearing in this one short, the character has proven quite popular and has appeared in quite a few Looney Tunes spin offs. The original title for this movie was going to be Bugs Bunny and the Gremlin. However since Disney was working on an animated feature film about Gremlins (a movie that would never be finished), the studio took the word Gremlin out of the title of this cartoon to appease the Disney studio. The following is a review from The Film Daily, "Literally and figuratively, Bugs Bunny, already a prime favorite among current cartoon characters, gets off to a flying start in the distribution season just started. The buck-toothed, long-eared clown meets up with a gremlin and both find themselves aloft in an airplane, with Bugs or what's left of him being darn glad to get back to earth. There are plenty of laughs throughout. The tough Bunny, if this initial '43-'44 offering of his producer Leon Schlesinger, is any criterion, is in for a further rise in popularity among fans who like humor. Of course the reel is in Technicolor. It was supervised by Robert Clampett and animated by Roderick Scribner. Warner Foster wrote the story and Carl W. Stalling handled the musical direction." This movie amounts to one of my favorite Bugs Bunny cartoons and it is appropriately in Jerry Beck's book, The 100 Greatest Looney Tunes.

Thanks for joining me and come back next week for more animated treasures. Until then may all your tunes be looney and your melodies merry.

Looney Tunes and Merrie Melodies: A Complete Illustrated Guide to the Warner Brothers Cartoons by Jerry Beck and Will Friedwald