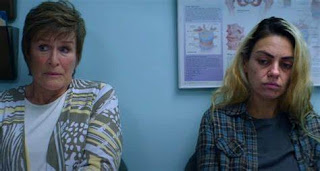 The performances of Mila Kunis and Glenn Close have been praised even by critics who didn't like the movie. There is good reason for this. Both give performances that are simply incredible. Most of us know Mila Kunis for The 70's Show, Family Guy, Ted and Bad Moms. This is not her first role in a non-comedic movie (Black Swan comes to mind), but still she is so associated with comedy that we often forget how good she can be in a dramatic role. Also none of her dramatic roles pushed her quite as far as this film does. Yet we do not spend much of the movie being surprised by her dramatic chops, for the simple reason that she so becomes the character that we honestly don't think about the actress. Here is a character who has messed up so many times and who those around her can struggle to forgive or let go of what she did. Yet for the film to work, we must still like and care about this character and that is what this performance lets us do. We get to see little glimpses of who she was before the drugs and the charm of that person (a charm that Mila can bring to any character) wins us over, but those are still only glimpses hidden within a character who has been completely overcome by drugs. This is not an easy role to play but Mila plays it to perfection. Glenn Close plays her mom, who is constantly internally tortured over her daughter's drug addiction. When her daughter comes back into her life, her daughter and her distrust but still love define who she is. She feels a need to be outwardly tough and aggressive with her daughter, but deep inside she loves her just as much as before the drugs entered her life. Close also plays this role to perfection. Even in the scenes in which she is the most tough and severe with her daughter, you can see the love in her performance. Describing the actresses' performances, I also mentioned another reason I like this movie. The characters go beyond, the stereotypical one note people they could have easily been. Instead their seems to be a real humanity behind them, that makes the movie feel all the more real to us.

The story can feel extremely familiar at times. We have all seen these types of movies and this one offers little that we haven't seen story wise. There are also a few scenes which feel rather forced (where she goes to help a friend, a speech in front of a bunch of students). Still for each of these forced scenes, there are quite a few that are incredibly effective and I will definitely admit I was moved by them. These scenes are quite moving and make one easily forgive the scenes that don't work. There are also characters that seem to exist mainly for plot reasons.

All and all this movie is very familiar but really effective.