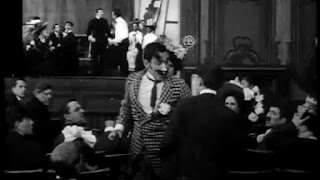 Today when most movie fans think of D.W. Griffith, what comes to their minds is big scale epics with long running times such as Birth of a Nation (1915) and Intolerance (1916). These people may be surprised to learn that some of Griffith's best work were his short films for the Biograph studio. Those Awful Hats is the shortest film that Griffith made, clocking in at a little under 3 minutes. This movie is also an unusual undertaking for Griffith because it is a comedy (a genre Griffith rarely used in shorts or features).

As you might expect for a film this short this film has a very simple and minor storyline. Some men try to enjoy their trip to the movie theater but have a hard time doing so as the screen is blocked by ladies with big hats. However this problem is taken care of in a creative and humorous way.

Though this essentially a one joke film, the joke is quite funny. The surprise way the hat problem is disposed of made me laugh out loud the first time I saw it. While the filmmaking is not as ground breaking as Griffith's later films or Corner of Wheat (1909) from the same year, with this short Griffith shows that he is more than a capable comedy director.

While Griffith's name is not often associated with comedy this film does feature a man whose importance to movie comedy can never be overlooked and that is Mack Sennett. Sennett entered the movie world at the Biograph Studio acting in D.W. Griffith's short films. He mostly worked in sporting roles in these shorts but did play the lead in another one of Griffith's rare comedies, The Curtain Pole (1908). That short was inspired by the short comedies of French comedian Max Linder (whose movies had a huge influence on Sennett). Looking at The Curtain Pole today it is hard to not see it as a sign of this to come for the soon to become King of Comedy. Sennett left Griffith in 1912 to start the Keystone Film Company, a movie studio which made exclusively comedy. The films made at the Keystone studio changed the way movie comedy was done for many years and still has an effect on comedy filmmakers today (whether those filmmakers intend this or not). Over the years he would produce many great films featuring legendary comedians like Charlie Chaplin, Mabel Normand (who also appeared in some of Griffith's Biograph shorts), Harry Langdon, W.C. Fields, Roscoe "Fatty" Arbuckle, Charley Chase, Edgar Kennedy and the Keystone Kops. Another person whose name is associated with movie comedy also appears in Those Awful Hats and that is Flora Finch. Like Sennett, Flora began her movie career at Biograph studios (though she had a very good stage career before hand). What she is best known for is her work at the Vitagraph studios. With The New Stenographer (1911), she first appeared with John Bunny. Bunny was one of the most popular comedic actors of his day and Flora became his leading lady (often playing Bunny's wife). Though many today discuss John Bunny more than they watch him, silent movie fans still associate her name with his. When Bunny died in 1915 (at the age of 51), Flora's career was greatly affected. Vitagraph made one short film with Flora in the lead, The Starring of Flora Finchurch (1915) but then relegated her to supporting roles. She left in 1916 to start The Flora Finch Film Company, where she made a series of comedies starring herself. Unfortunately this did not help her recapture her past popularity and soon she spent the rest of her career in supporting roles. Laurel and Hardy fans might know her for a brief role as a wife of a breaded cowboy in the feature length, Way Out West (1937). Her other appearances in D.W. Griffith films include, The Helping Hand (1908), Mr. Jones Entertains (1909), Mr. Jones Has a Card Party (1909), A Wreath in Time (1909), His Wife's Mother (1909) and The Way of Man (1909).

The following is a review from Moving Picture World (warning spoilers), "'Those Awful Hats.' —The Biograph folks have illustrated tin- big hat nuisance so graphically in this film that it needs no praise. It speaks for itself. It might be a good thing if one of the dredging machines shown here was in operation in every theater removing hats. More could be seen on stage and screen."

The following pages from the 1925 book When the Movies Where Young by Linda Arvidson (D.W. Griffith's first wife and actress in this film), tell a story behind Those Awful Hats. (warning spoilers) 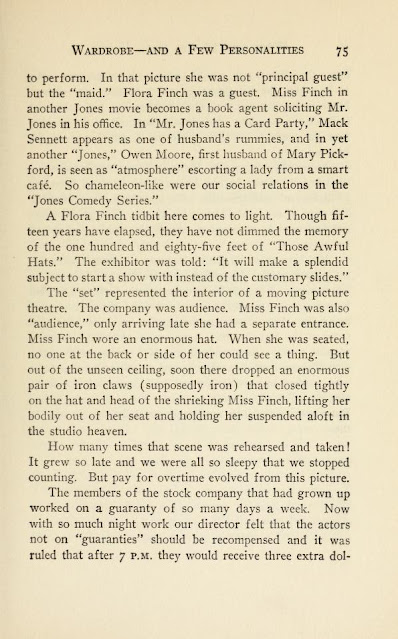 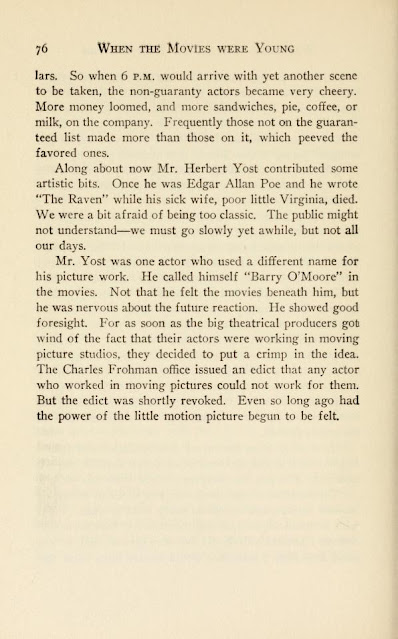 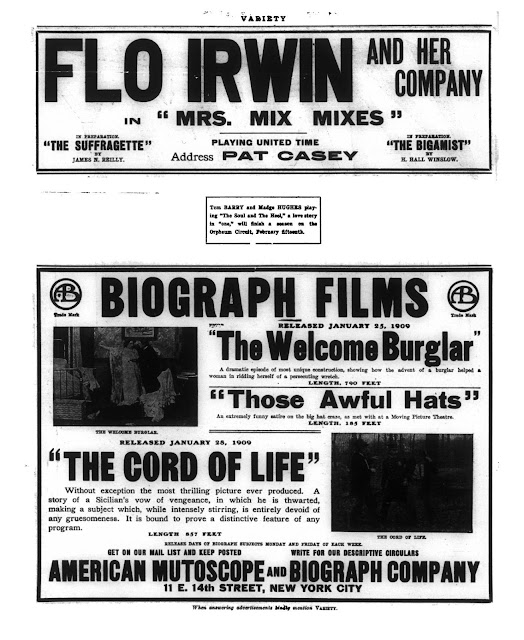 The Silent Clowns by Walter Kerr