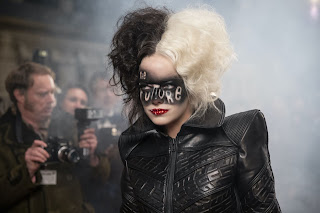 A stylish and fun (if surprisingly dark) take on the classic Disney villain.

When I first saw the preview for this movie, I had one question on my mind. How will Disney manage to make a movie where the protagonist is an evil character who was often referred to as a "devil woman?" The answer is a simple one, give the film a villain who is even more evil than Cruella. It works fantastically. Cruella herself may be cruel (as the name implies) but just like her animated counter part, she is a joy to watch. Much of this is due to an excellent performance by Emma Stone, who seems to be having the time of her life playing this role. Her energy is infectious and I found myself often fully giving in to this energy and the sense of fun. This is only heightened by the scenes she shares with the film's real villain. Much of this is due to how much pure chemistry Emma Stone and Emma Thompson have with each other and what a joy it is to watch these characters' battle of wits and egos. This movie is also a pure wonder to look at. Everything that appears on screen is as stylish and over the top as our main character and the look of the film draws us further into the mad world of these characters. Special shout outs must go to costume designer, Jenny Beavan and set designer, Alice Felton for going above and beyond in giving this film its incredible look. Plus I must praise director Craig Gillespie, for not being afraid to go a little over the top with the look of this movie, as it couldn't have worked as well any other way. The film is also helped by an excellent soundtrack. Music and song choices play an important role in this movie and every major scene is accentuated with a song. These songs are mostly rock songs from the 1960's and 70's and they not only perfectly fit the onscreen action but enhance it as well.

This movie also seems to be much more interested in an adult audience than a kids one. This is heightened by a number of surprisingly dark scenes that make one forget they are watching a Disney film. There were times when I excepted the movie to go even darker, but then remembered this is after all Disney. I was surprised at first to see that this movie was rated PG-13, but after watching it I can't help but feel it is earned. Yet the movie never becomes too dark to lose its sense of over the top fun, in fact the darkness adds to fun.

On the downside while this movie is certainly in many ways darker than most Disney films, there are quite a few little winking references to the animated movie. These are too cute and obvious to fit the rest of the film's tone. Because of this they take you completely out of the movie. The film also features too much obvious on the nose dialogue that again takes you out of the movie. Cruella is also a bit overlong and could definitely have used a short run time. There are a few scenes that seem to drag a bit, as well as some that feel like complete padding.

This movie is like Cruella herself, wild, crazy and a lot of fun.
Posted by Michael J. Ruhland at 9:53 PM