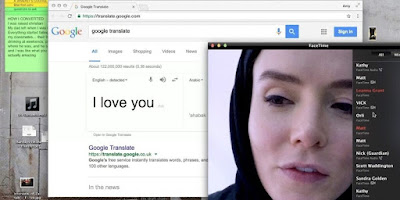 An engaging and stylistically successful thriller, but a lot of it makes less and less sense the more you think about.

While this is not the first movie to use the device of having the whole film take place on a computer screen it is done very well here. This stylistic choice is not the simple gimmick that it may sound like. It works very well for a couple of reasons. One of these is that there is no reason to see our main character off the computer. The movie is about what happens when she is on the computer and anything else would be just padding. Another reason is that this is the best way for the movie to build up suspense. It brings us further into the dangerous world our main character has found her self in. It also gives us a peak into her mind as we see what she is looking at online. This makes the film an effective character study without ever having to fall into obviously expository dialogue. This device also provides the film with some of its most effective suspense moments. The idea of having to deal with calls coming in at the most inopportune and dangerous times can make even the smaller scenes edge of your seat moments. This device does present one major problem through the lack of any transitions or visual lapses in time. It can be hard to keep up with how much time has passed at times and whenever we are shown something that signals how much time has passed it comes as a complete surprise.

The storyline is based on a gripping true story and as you watch the film it is no surprise that the filmmakers wanted to adapt this story as a movie. It is a truly suspenseful and important story and much of the suspense is seen to good advantage in this movie. Yet at the same time there are quite a few real problems with the way the story plays on screen. One of these is that our main character seems completely inept at her job. I may not be a professional reporter and I have never gone undercover, but there is no doubt that if I were going to go undercover by having long skype sessions with Isis terrorists, I would have done my research well ahead of time. She instead is learning about this and doing her research as she goes along with no preparation ahead of time. Not surprisingly a lot of the moments in which she finds herself in some sort of danger, are caused by her doing this. This makes it hard for us to believe that this character is in any way a good reporter. This movie also suffers from side characters who act as nothing more than obstacles in the story. This is especially true of her boyfriend, who has no personality outside of his basic function in the story. Characters like her boss and the IT guy, similarly only exist to move the story forward. There are also quite a few moments in the story that take more suspension of disbelief than many will have.

This movie is a well made thriller in a lot of ways and is quite fun to watch, but when you stop to think about many scenes they make no sense.
Posted by Michael J. Ruhland at 9:16 PM