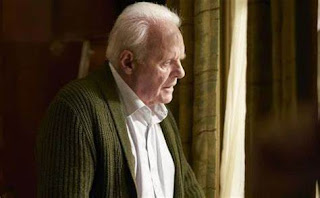 An extremely good movie, but the subject matter makes it a difficult watch.

As this movie starts it appears we are going to watch a very straightforward film. However it is not long until we question whether what we just saw was real or not. Our main character has dementia and we are seeing things through his point of view for the majority of the film. Because of this we never know if what we are seeing is real or not. This gives us an incredible connection with this character and what he is going through that it becomes hard to picture the film being done any other way. Of course our connection with the character is only enhanced by that character being played by Anthony Hopkins. With a career full of great performances this one can stand with the best of them. He brings a real fragileness and we can feel his loss of control. While this character is rough around the edges and demanding, we can see behind this the need to hold on to some control of the world around you when you don't have any. This makes even the moments when this character should be unlikable into truly heartbreaking scenes. Oliva Colman certainly holds her own in this film as well. As much as we can put ourselves in Anthony's role, we can see ourselves in hers as well. Her performance perfectly captures the heartbreak and pain as well as the irritation of someone who has a loved one going through this. The film is so emotional effective that it can be hard to even look at a lot of times, but I left the theater incredibly moved by what I just saw and grateful I watched it.

The biggest fault with this film is the few scenes in which our main character is not present. This simply takes us a little out of the movie and goes against what the rest of the film does so well. However these scenes are brief.

If you want fun escapism go see Godzilla Vs. Kong. However if you want something that will truly move you, this film certainly will.
Posted by Michael J. Ruhland at 6:31 PM