Some Cartoons For Saturday Morning #118

Hello my friends and happy Saturday Morning. Once again it is time for some classic cartoons.

Today's cartoon selection begins with Porky's Pooch (1941). Though all the classic Charlie Dog cartoons would be directed by Chuck Jones, this Bob Clampett short clearly sets up the template that all of those later cartoons would follow. In fact the first Charlie Dog cartoon, Little Orphan Airedale (1947), would be a remake of this film. The backgrounds in this film are live action photographs. A year later Bob would use a live action opening for Eatin' on the Cuff or The Moth Who Came to Dinner (1942). The following is an exhibitor's review from Motion Picture Herald, "PORKY'S POOCH: Looney Tunes Cartoons—Right up my alley for my patronage. Running time, 7 minutes. —Vic Stephano, Grove Theatre, Groveton, Tex. Small Town Patronage." A review in The Motion Picture Daily called the film, "Good for a few laughs." The Showman's Trade Review gave advice to movie theater owners on how to advertise this cartoon, "Play it up to all Porky fans and make some new fans to win over some of the dog lovers in your community by staging a pet show, prize contest for best snapshot of a pet or prize contest for a brief essay on 'why my dog is the best in town.'"

For Disney fans (like myself), one of the delights of the early cartoon shorts is that Walt Disney himself directed them. This brings a real historical interest to these films as it gives a fascinating look into the ideas of the man himself. After Night (1930), Walt would step back from directing Silly Symphonies shorts and serve instead as the series' producer. However he would return to the director's chair for one more short, The Golden Touch (1935). Michael Barrier's book, Hollywood Cartoons: American Animation in its Golden Age quotes Disney animator Ben Sharpsteen as saying, "that he [Walt] was kind of getting his hand in directing on this picture and that he was going to continue over into Snow White ... But as it turned out, The Golden Touch was a stinker." While I wouldn't call this film "a stinker," Walt himself did not feel too happy with it. Walt would call it "a tremendous flop" and if he was planning on directing the feature length Snow White this short gave him second thoughts. Walt could be highly critical of other director's work and he could be equally critical of his own. This cartoon also stands out because it only featured two animators, Norm Ferguson and Fred Moore. These two had already more than proven their worth. Ferguson was known as one of Pluto's best animators and Moore was considered one of Mickey's best. For the most part Ferguson animated King Midas and Goldie animated Goldie. However since Midas had more screen time, Moore animated Midas in one sequence. This sequence involved Midas testing out his new ability with utter glee. A review in Motion Picture Reviews stated, "   It lacks humor and is disappointing generally." The following is a review from The Philadelphia Exhibitor, "THE GOLDEN TOUCH. UA-Disney—Silly Symphony. 8m. All of Disney’s cartons are in the top bracket, and even if this one doesn't touch the peak of others, it is still better than most of the better class from other companies. Story of the king whose touch turns everything into gold, king is a bit to comic-strip in type and picture lacks usual Disney whimsical touches."

Now we join Gandy Goose in Sourpuss in The Exterminator (1945). Most of the Terry-Toons featuring these characters followed the same basic formula with imaginative and day dreaming, Gandy drawing cynic Sourpuss into his own flights of fancy. This one abandons that basic premise and instead puts our heroes into a chase cartoon as they try to get rid of mice. This film ends with a humorous moral from Aesop. This recalls the silent-era Aesop's Fables cartoon that studio head Paul Terry worked on, which would often end with similar morals.

Now we join Popeye the Sailor in a very unusual cartoon, Be Kind to Animals (1935). The reason this film is so odd is that the voice is not provided by Jack Mercer or Billy Costello, but rather Floyd Buckley. Buckley was the voice of Popeye on the sailor's radio show, but this is the only time he voiced the character in a cartoon. The voice does sound quite different from how we today except Popeye's voice to sound, and I can't help but wonder how many people have seen this short in recent years and were taken aback when Popeye speaks. This was noticed at the time of its release as well as evidnced from the following exhibitor's review (from the Motion Picture Herald), "BE KIND TO ANIMALS: Popeye The Sailor— Popeye's bass voice which did so much to popularize him is missing in this, cartoon; having been subplanted by another. Just average and only passable. - John A. Milligan, Broadway Theatre, Schuylerville, N. Y. Small Town Patronage."

Next comes one of the most famous, if not the most famous, cartoon short of the silent era. This is of course, Gertie the Dinosaur (1914). This film was directed by Winsor McCay, who was already well known before he made his first animated film due to his newspaper comic strips Little Nemo and  Dream of the Rarebit Fiend. Gertie was not the first animated cartoon (as has so often been claimed) or even McCay's first film but it featured a level of character animation not seen before this point. Gertie never feels like a moving drawing but a real living character. It would take a long time for the rest of American animation to catch up with what had been achieved here. This cartoon still holds up incredibly well today and received the number 6 spot in Jerry Beck's book, The 50 Greatest Cartoons.

I have mentioned before on this blog that I am quite a fan of director, Norm McCabe. Some of his best cartoons are those featuring the one and only Daffy Duck. McCabe kept Daffy's crazy and energetic spirit while also adding more to the character's personality. This Daffy was caught up in himself and his own way of viewing the world (much like the later Chuck Jones version), but he was still a good natured and fun loving character who wanted nothing more than a good time. Up next is one of McCabe's shorts with the duck (and a very good one too), Daffy's Southern Exposure (1942). The following is an exhibitor's review from the Motion Picture Herald, "DAFFY'S SOUTHERN EXPOSURE: Cartoon- Good black and white cartoon. Enjoyed by people that saw it.—Conrad H. Tapia, Chief Theatre, Casa Grande, Ariz."

This morning's cartoon selection ends with one of Walt Disney's great silent Alice Comedies, Alice's Wild West Show (1924). This is probably my favorite film in the series. The series combined animation with live action. The early entries in the series (which this is one of) feature extensive use of fully live action scenes with a few cartoon scenes. The cartoon scenes would feature our live action Alice interacting with animated characters (including Walt's first cartoon star, Julis the Cat) in a cartoon environment. Later films would do away with the fully live action scenes and often put Alice in supporting roles. Alice was played by four young actresses over the course of the series; Virginia Davis, Dawn O'Day, Margie Gay and Lois Hardwick. In this short Alice was still played by her first actress Virginia Davis (Leon Holmes and Tommy Hicks also appear in this film). Like The Golden Touch Walt also directed this short as well as serving as an animator (Rollin "Ham" Hamilton also animated on this film). Working in the Ink and Paint department was Walt's future wife, Lillian Bounds. A review in Moving Picture World states, "This makes an interesting reel, with considerable pep, human interest and comedy, which should prove a pleasing novelty with the average patron and appeal especially to children." 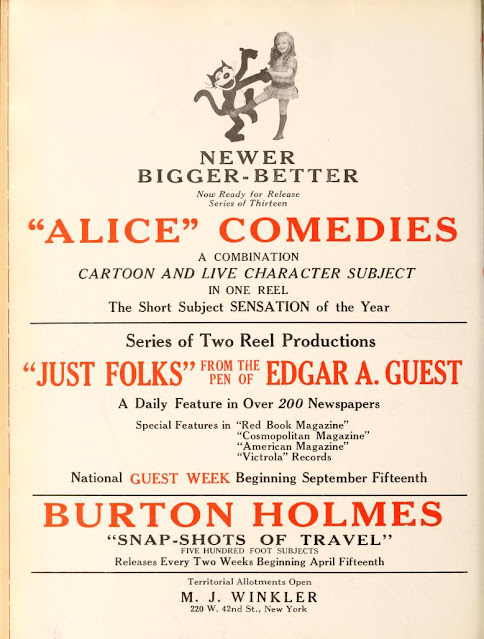 Thank you for joining me. Come back next week for more animated treasures. Until then may all your tunes be looney and your melodies merry.

Michael J. Ruhland
Hi, I'm Movie Blogger, Michael J. Ruhland. I research and write about a wide variety of movies ranging from the silent era to modern day. This blog is a labor of love for me and I would like to thank all who read it. Movies are your best entertainment.