Some Cartoons For Saturday Morning #119

One thing that sets the Disney cartoons apart from what other cartoon studios were doing in the 1930's is the sheer amount of major characters that appear in one film. For instance in Hawaiian Holiday (1937), Mickey Mouse, Donald Duck, Goofy, Pluto and Minnie all appear. This cartoon is the first Mickey film to be distributed by RKO after Disney left United Artists. The Disney studio certainly started their RKO run on the right foot with this short. This is a delightful cartoon in every way. This film also shows the mastery Disney had over character animation by this time. This is probably best shown through Pluto's run om with a crab. Though Shamus Culhane was not new to animation at this time (having worked for Fleischer and Ub Iwerks before), with this film he made a name for himself at the Disney studio. He wouldn't stay long at Disney as he would animate for Fleischer, Warner Brothers and most importantly Walter Lantz. At Lantz he would direct some of that studio's funniest films. The following are some exhibitor reviews from The Motion Picture Herald, "HAWAIIAN HOLIDAY: Mickey Mouse—These Disney cartoons so far out-shadow the other producers in drawing power and workmanship that there is no comparison. This one is great. Running Time, Seven Minutes. - A.J. Inks, Crystal Theatre, Ligonier, Ind. Small town and rural patronage."  "HAWAIIAN HOLIDAY: Mickey Mouse—This was the first RKO Disney we have played. The kids and adults eat them up and ask for more. Running time, 10 minutes.—R. W. Crickmore, Rainbow Theatre, New- port, Wash. General Patronage." "HAWAIIAN HOLIDAY: Mickey Mouse—I am decidedly a Disney fan. Walt has always given us something to sell that we were sure would click. This was up to the standard of all Disney subjects. Our audiences watch for his subjects like they do weather reports. They are the top money getter of all cartoons, no doubt. Weekend with 'Everybody Sing.' Running time 9 1/2 minutes. - R.D. Leatherman, Rialto Theatre, Denison, Texas, Railroad town patronage."  "HAWAIIAN HOLIDAY: Walt Disney Cartoons- Just a fair Mickey Mouse cartoon. Running time, 7 minutes.—Richard C. Welch, Comique Theatre, Camden, Me. General Patronage." 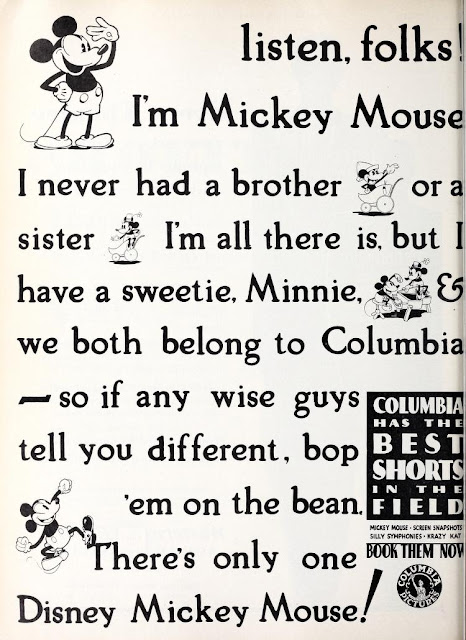 While I understand why some people may not like films that are clearly of their time, I admit to having a huge fondness for them. They give a great peak into both world and film history. I wasn't alive in the 1960's, but I love the Pink Panther cartoons for their pure 60's-ness. One of the most 1960's of these cartoons is Psychedelic Pink (1968).


Now we come to one of Bob Clampett's earliest directorial efforts (his second for Warner Brothers), Get Rich Quick Porky (1937). This cartoon may lack the pure insanity of Clampett's cartoons in few years, but it is incredibly charming. The characters of the dog and the gopher are quite Disney-like for a Clampett cartoon. In fact the dog is very much like Pluto. The majority of the dog's scenes would be animated by Bill Hammer and Chuck Jones. Chuck would handle most of the animation for the gopher. Perhaps this is not surprising as Chuck's earliest directorial work, would be very Disney inspired.

Up next is a delightful Terrytoon, Barnyard Amateurs (1936). This cartoon features Terrytoon's most used reoccurring character at this time, Farmer Alfa (who seems very energetic for an old man). However most of the attention goes to the various performing animals. While in typical Terrytoon fashion this film can be a little crude at times (especially compared to what Disney, Warner Brothers and Fleischer were making at the time), I love the pure cartoony feeling here. The following is a review from The Philadelphia Exhibitor, "BARNYARD AMATEURS. 20th Century-Fox- Educational—Terry Toon. 6m. The farmer does a Bowes, with the result a passable entry, showing some flashes that seem to indicate that if these concentrated on quality, not quantity, they might be much better. FAIR." The following is an exhibitor's review from The Motion Picture Herald, "BARNYARD AMATEURS: Paul Terry-Toon—A very good black and white cartoon and will please all. An amateur contest in a broadcasting station.—C. L. Niles, Niles Theatre, Anamosa, Iowa. General Patronage." 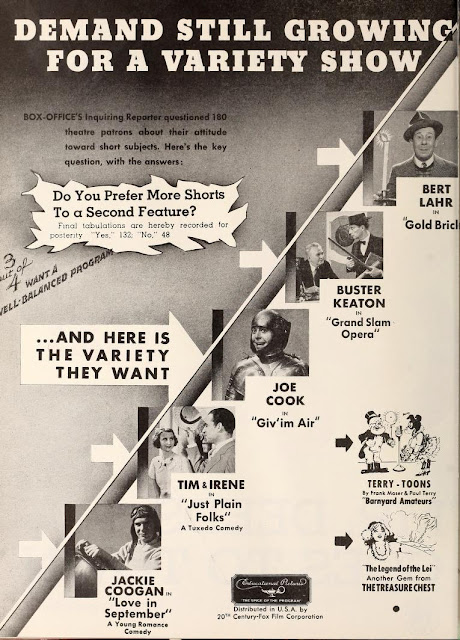 In the mid to late-1960's many Looney Tunes and Merrie Melodies pitted Daffy Duck and Speedy Gonzales against each other. While these films do not always have the best reputation among cartoon fans, I personally enjoy them for what they are. They may not be the best Warner Brothers cartoons, but they are (to me at least) quite enjoyable in their own right. Here is one of those cartoons, The Spy Swatter (1967). This film is directed by Rudy Larriva, who is best remembered for the coyote and roadrunner cartoons he directed around this time (which are held in even lower regard by those who don't like these Daffy and Speedy cartoons).

Next comes an MGM Happy Harmonies cartoon, The Early Bird Gets the Worm (1936). The Happy Harmonies series were created by Hugh Harman and Rudolph Ising, who brought us the earliest Looney Tunes and Merrie Melodies (all three series titles are take-offs on Disney's Silly Symphony series).

Last but certainly not least comes an all time classic, The Dover Boys at Pimento University (1942). This is one of Chuck Jones' most daring (and arguably one of his best) films. The stylized design and animation were unlike most anything being done at this time and look forward to what UPA would become known for in the 1950's. Many have cited Chuck Jones as a very strong influence on UPA and with a cartoon like this who could argue? It is worth noting that the credited animator on this film is Robert Cannon, who would become an important director for UPA (he directed Gerald McBoing-Boing (1950) there). Much of this film's charm came from background artist, Gene Fleury and layout artist John McGrew. These were two very experimental artists and Chuck gave them plenty of room to experiment. They are a huge part of why Chuck's cartoons for this era really stand out. If you are a fan of Disney's Goofy cartoons, you will probably recognize the narrator, John McLeisch (who narrated most of the Goofy "how to..." shorts). The film's writer Ted Pierce does the voice of Tom. However the scene stealer of the voice actors is Mel Blanc as he seems to be having a blast voicing the villainous Dan Backslide (coward, bully, cad and thief). Visually Dan Backslide is a caricature of Warner's animator, Ken Harris. This film appropriately appears in Jerry Beck's book, The 100 Greatest Looney Tunes.

Thanks for joining me come back next week for more animated treasures. Until then may all your tunes be looney and your melodies merry.