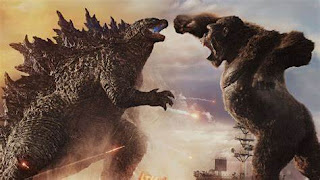 What we all want from a movie that pits Godzilla and King Kong against each other is for it to be a lot of fun. Luckily that is just what this film is.

This movie perfectly shows how you do big budget CGI spectacles right. This is certainly true of my friend King Kong. Kong has always been my favorite of giant movie creatures (the 1933 original has a special place in my heart). The reason for this is despite him being an ape, he was always the most human to me. He is massive and threatening while at the same time sympathetic and tragic. This has always been captured best by the way he was animated. He has never been a corny special effect, but a real breathing creature. Though he has gone from stop motion to CGI, this still remains true of him. The animation of him here is simply fantastic capturing all the emotions going through his head and making us forget he is animated. His relationship with a small girl (played by the scene stealing Kaylee Hottle) here adds a heart to the film that just reminds us why we love him so much. Godzilla is a very different character here. He is presented as simply a powerful force that shows up to destroy things and fight King Kong. Unlike Kong he doesn't appear out of an action scene and though he has his reasons for what he does, he never gets to act like Kong does. Still for what he is given to do, Godzilla does it very well here. The climatic battle is fricken awesome and if I was grading that alone this movie would have gotten an even higher grade. This fight is all that movie fans could ever hope it could be. Again this is CGI spectacle done right and we never stop to think about how these characters are actually CGI. At this point you don't take your eyes off the screen and you have a real blast.

Unfortunately there is also a side-plot involving two teenagers and a podcaster investigating why Godzilla is all the sudden attacking. These scenes are simply put, not very good. The characters are boring, the humor isn't funny and the suspense is nonexistent. Whenever these scenes come up you simply groan and want the movie to go back to what it was doing elsewhere. Luckily they aren't as distracting as they could be, but that doesn't change that these scenes are poorly done. This film also tells us that King Kong and Godzilla have an "ancient rivalry," but neglects to tell us why. The story can a bit predictable as well.

Though this movie is available on both streaming and in theaters, if you are comfortable with going to the movies, certainly do so. I saw this in a theater and it was obvious that this film was meant for the cinematic experience and while it will be enjoyable at home, you certainly will be missing out by not by doing so.

If Godzilla and King Kong fighting sounds like something you will enjoy, you will definitely like this movie. I certainly did.