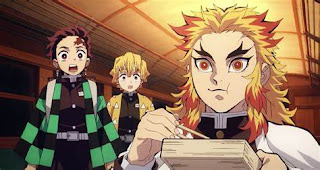 An exciting and emotionally effective movie that continues the story of the popular anime.

I have to be honest I have never seen the anime that this movie is a part of and honestly didn't know what to expect going in. I was worried this would be another Downton Abbey (a show I haven't seen and a movie that bored me). I needn't have worried at all. While there were a couple parts I didn't fully get and I wouldn't be surprised if fans of the show, would give this an even higher grade than me, I thoroughly enjoyed myself from start to finish. The first thing that struck me was how the film is full of atmosphere. It is dark and creepy yet at the same time enchanting and inviting. As the film went on, I found myself more and more fascinated and involved in the world this creates. I must say though that the beautiful background art certainly did not hurt in this department. In fact the whole movie is a visual treat. While there are some characters that didn't feel fully fleshed out to me (something that may not be true to those who have seen the show), Tanjiro is not one of them. This character felt completely real to me. Him having to confront the death of his family is truly heartbreaking. This adds a real emotion poignancy to an other wise action heavy film. Speaking of the action the action scenes are fantastic and simply a joy to watch. The two climatic battles are incredibly well done and will provide any action fan with just what they want. This is helped by villains that are delightfully creepy and threating. This movie also has a really good sense of humor and I found myself laughing quite a bit. The character of Inosuke made me laugh out loud several times.

The largest fault of the film is in a lot of the dialogue (I saw it in Japanese with English subtitles) narrates what we can clearly see on the screen for ourselves or what the filmmakers could have told us in an other way. This honestly gets pretty annoying at times.

I am sure that all fans of the anime will love this movie, but if you are like me and haven't seen the show, this film still has quite a bit to recommend it.
Posted by Michael J. Ruhland at 10:16 PM