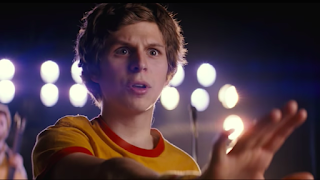 I admit before today I had never seen this film. Seeing that the movie was put back in theaters I felt this was a perfect time to see it. With how much people love this movie, I had high hopes but I can only say this film is a real disappointment.

The main problem lies in Scott himself. There is little if anything to enjoy about this character. The guy is a real jerk and to make matters worse he just causally hurts the most likable character in the movie (Knives) and doesn’t think a thing about it. Why are we supposed to root for this guy again? On top of that his constant whining comes off as annoying rather than sympathetic. So the character is not only an unlikable jerk but he is not even an entertaining one. This is not to say he is the only problem here. This movie's sense of humor comes off as more random and bizarre then actually funny. No matter how strange ideas like vegan superpowers, bad guys turning into coins, demon hipster chicks or fighting animals materializing out of music are, they are ideas that work better on paper than in an actual movie. As I watched them play out on screen, they simply did not even raise a smile. These are type of things that are funny when you are joking around with a bunch of friends, but lose their funniness outside of that environment and definitely don't work in a movie. With the exception of Knives (who I really liked), all the characters are strictly one note stereotypes that are not entertaining or engaging in the least bit. This definitely hurt the action scenes which lacked any suspense due to a lack of any emotional involvement. The actions scenes were also hurt by the sheer amount of evil exes Scott must fight. The first two are entertaining enough but all the rest (including the final battle) become too repetitive and dull.  By the third ex, I was getting bored of these fight scenes and their feeling of sameness. Now if like an actual video game these fights felt like they had a sense of building to something bigger and more deadly with each one, this might have worked but sadly that is not the case here. This movie also hurts from a fantasy world that is never engaging. To me suspension of disbelief and fantasy as a genre revolve around the idea of believing in a world where the impossible could happen. Unfortunately this film feels like it is making up the rules for its world as it goes along. The movie never establishes how this world actually works and because of that it feels completely fake and uninteresting.

To go to the stuff I liked here, the songs were a lot of fun. They had a real energy and were well worked into the story. The cast did a really good job with material (that in my mind) is not that good. Also again, I really like Knives.

I know I am in the minority for not liking this movie and I am glad others get an enjoyment out of it that I do not. Still I couldn't help but be disappointed by this film.