Movie Review: Together Together 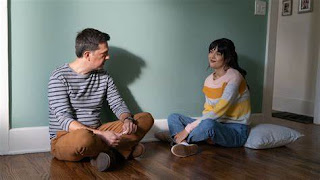 In many way this movie is like a romantic comedy without any romance. It follows many conventions of the romantic comedy but it is about a friendship. This gives the film a refreshing feeling that is quite different from what we are used to while still following movie conventions closely. Like in a romance movie, the most important ingredient is the chemistry between the leads. Luckily Ed Helms and Patti Harrison are perfect together. They may seem like unlikely best friends on paper, but when you see these two together the love can not help but be felt. Even in the scenes in which they are not getting along, you can feel just how much they care about each other. In the scenes where they do get along they are not only charming but completely adorable. Still there is even more to recommend this movie than just the two leads. Director and writer Nikole Beckwith (this is only her second directorial effort) fills the movie with a lot of charm and humor. While I would have liked more laugh out loud moments, the ones that are here were really funny. The basic story again mostly follows a template given by other movies but does so with enough sincerity and honesty as to never feel like it is simply copying or going through the motions. Instead you believe in the story and the characters enough to overlook the clichés. In fact there are moments when you might find yourself emotionally moved.


On the downside is Ann's (Patti Harrison) co-worker (Julio Torres) at the coffee shop. This character is a walking romantic comedy cliché and his comedic moments are the least funny in film. While the movie has a great message about people being able to find real happiness outside of societal norms, there are a few times the dialogue can feel too on the nose and a little forced when it comes to the movie's message.

All in all this movie is truly charming and often a joy to watch.