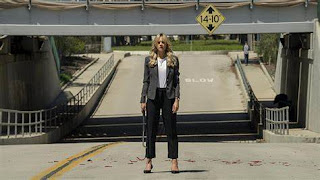 A well made set up leads to an ending that simply doesn't work.

This movie got off to a great start, as we see our main character pretending to be a drunk girl in a bar, so a "nice guy" will pick her up and she can get the upper hand on them when she revels herself to be sober and the one in control. This is fantastic, as it brings us something dark and twisted and yet darkly funny at the same time. We begin to wonder just who this woman is and what turned a seeming intelligent into this character. As such we are completely engrossed in the film from the beginning. When we learn the answer it is so tragic and disturbing that we find ourselves drawn further into the dark world of the film. Meanwhile there is a well done romance with someone she used to know in school. This romance is very cleverly worked into the dark storyline and both offsets it with its delightful sense of humor and adds to it with some dark twists. This is a very well done set up. The characters may not be likable or sympathetic, but they are interesting and we are also very drawn in to the dark and pessimistic world of this film.

Unfortunately with a such a good set up the movie doesn't live up to what it set up. The climatic scene is completely disappointing lacking the necessary suspense or unsettling feeling that is required for it to work. It then goes for a twist that while brave, doesn't work. I appreciate that the filmmakers wanted to take a risk, but the danger with taking risks is that they don't always work. This one certainly doesn't. I can kind of get what the movie was going for but I was left completely cold and the only emotion I felt was a strange disappointment. After this twist the movie continues for a bit that feels a lot longer than the rest of the film put together. Worse yet comes the movie's actual end scene. I hate to use this word because the rest of the movie was the opposite but the best way to describe the ending was cute. It felt like it came from a completely different and much more lighthearted movie.

However no matter how much the film goes downhill towards the end, I can not deny that the rest of the movie was darn good.