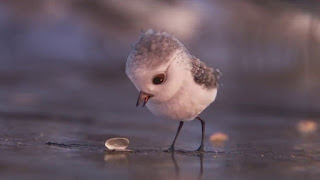 Some readers may know that right now is Pixar Fest at Disneyland and California Adventure. This offers much to enjoy for those who love Disney parks like me. Both parks are very well decorated, there is Pixar themed food and you can even learn to draw your favorite  Pixar characters at the Animation Academy. However for film buffs like me one of the most fun things to do at Pixar Fest is at the Sunset Showcase Theater. Here you can watch three Pixar short films in a row. These shorts are For the Birds (2000), Lava (2015), Piper (2016). While these films (especially Lava and Piper) are recent enough for many of us to have seen them in theaters, when originally released, this does not change that watching them again in the same setting is still very fun. Again this is simply a must do for any of my fellow film buffs visiting the park. Hurry though it is only here until May 18th, when it will be replaced by a sneak peak of The Incredibles 2.