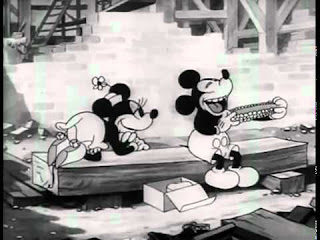 Building a Building was directed by Dave Hand, who was directing quite a few of the Disney cartoon shorts at this time. He would go on to become the supervising director for two Disney features, Snow White and the Seven Dwarfs (1937) and Bambi (1942).

This cartoon features one of the earliest incidents of a cartoon character getting hit with an anvil. However Walt had done this gag at least once before with the short, Alice the Whaler (1927).

The following is what one exhibitor wrote to the Motion Picture Herald.
"Building a Building: Mickey Mouse - This is a very good cartoon comedy and one that will make any audience laugh. One of the best Mickey Mouses and here's hoping there are many more to follow. Running Time, nine minutes.  - J.J. Medford, Orpheum Theater, Oxford, N.C. General Patronage."

Story: Mickey is working on a construction site using a steam shovel. Minnie comes to the site selling box lunches. Mickey and Minnie soon begin flirting much to the annoyance of foreman Pete. Pete begins flirting with Minnie but Minnie is not interested. Pete kidnaps Minnie, and Mickey rushes to save her. Mickey does and gets fired. Mickey and Minnie go into business together.