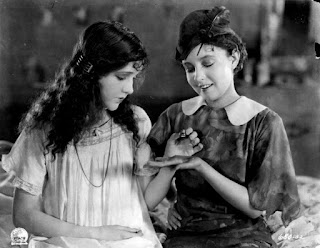 To celebrate my birthday, I went to see the 1924 silent film version of Peter Pan with live musical accompaniment at the Old Town Music Hall. Because of this, I feel it is a great time to write about this film.

This movie is pure entertainment at its best. The film has humor, heart, excitement, adventure and most of all just a pure sense of fun. I also think this is a perfect film to introduce others to the magic of silent movies. The movie does not strive for realism in any way. It is instead content on being a full on fantasy. With this it is easy for an audience to get fully sucked into its fantasy. This is a fairy tale in its truest sense and of a type of film in which I'd love to see there be a comeback.

One reason we accept this completely unrealistic film as real is because the characters feel completely real. This is especially true of the charming but complicated relationship between Wendy and Peter. This relationship closely resembles the one in the play and it is just as delightful in this movie.

Of course the live musical accompaniment and seeing it on the big screen only added to the magic of this movie. Though no one enjoys watching silent movies alone on DVD more than me, once you see a silent movie like this you know that's the way it was always meant to be seen. The whole film comes to life and you are sucked into its magic.

This movie was directed by Herbert Brenon. Brenon also directed such films as Dr. Jekyll and Mr. Hyde (1913), Beau Geste (1926), Laugh Clown Laugh (1928) and The Flying Squad (1940). The screenwriter was Willis Goldbeck, who would later be one of the screenwriters for Freaks (1932) and The Man Who Shot Liberty Valance (1962). He would also be a writer for the Dr. Kildare movies of the 1930's and 40's. However J.M. Barrie, the creator of the original story wrote additional scenes for the movie.

Just like in the play, Peter Pan was played by an actress. This ended up being Betty Bronson, who did a fantastic job as the character. However who was to play this role was not decided when the film began. An article in Moving Picture World (dated August 30, 1924) stated "For over half a year the quest for the player to portray the title role in the film version of 'Peter Pan' has been conducted. Seventeen-year-old Betty Bronson won the role of 'Peter Pan' in competition with one hundred aspirants, among them some of the world's greatest artists." According to various articles around the time, actresses considered for the role included Gloria Swanson, Viola Dana, Betty Compson, May McAvoy, Marilyn Miller and Mary Hay. There was a rumor that Mary Pickford was being considered for the role. An article in The Film Daily (dated July 23, 1924) stated "Mary is alleged to be the choice of Sir James and the public for Peter Pan but she has denied vehemently at all times that she would make pictures for any company but her own." The search for someone to play Peter Pan became so famous that an article in Exhibitors Herald (dated August 9, 1924) jokingly stated that the role was going to Jack Dempsey. J.M. Barrie chose Betty Bronson for the role himself, the same Moving Picture World article quoted earlier stated "Tests of every possible player for the role were made and when Herbert Brenon, who will produce the picture, left New York for London a little over a fortnight ago, he carried a trunkload of film from which Sir James Barrie was to make a choice." Bronson was extremely grateful and wrote a telegram to Barrie that stated "I feel like a new Cinderella thanks to you. I realize the importance of your trust in me and my tremendous responsibility. I pledge my every effort to justify your faith. I am the luckiest girl in the world. Betty Bronson." A better actress could not have been picked to play the part, she is not only fun to watch, but captures the small subtleties of the character every time she is on screen.

An article for The Film Daily (dated February 6, 1924)  stated "'Peter Pan' James M. Barrie's famous play is to be produced this summer by Famous Players. While no announcement was forthcoming from the company, it was learned from an authoritative source Friday that the scenario has been completed and that it is planned to have the picture ready for release around Christmas.

"Famous had owned the rights for several years, having acquired them with the rights for Barrie's other works. There has been considerable speculation as to why the picture was not produced long ago, but it is understood that is was held off in the hope that Maude Adams, who created the title role and who scored her biggest success in it, would change her mind and return to the stage. Apparently, hope of getting Miss Adams back on the stage has been abandoned, and as Peter Pan cannot be conceived without her in the title role, arrangements for its production are being made."

Executive producer Jesse L. Lasky told Motion Picture World, "We have three distinct finds included in the cast. Betty Bronson, selected by James M. Barrie for the title role, is the first. Another is Mary O'Brien chosen to play the role of Wendy. She is a very promising player is an ideal Wendy according to all traditions. The third is Ester Ralston, who has been signed to play the role of Mrs. Darling. Miss Raltson's grace and charm of manner is displayed to splendid advantage as the mother of quaint nursery people."

This film was extremely popular when it came out in the Christmas season of 1924. The critics could hardly hold back their praise. A reviewer for the Los Angles News wrote "The greatest photoplay of its kind ever made." A reviewer for Detroit News wrote "Motion pictures like 'Peter Pan' simply must be made to thrive in this battered old movie world of ours." A reviewer for the Atlanta Journal wrote "Easily one of the most delightful and beautiful productions yet seen on the motion picture screen." A reviewer for the Baltimore Morning Sun wrote, "No finer treat could ever be devised." The movie received $2 million on its first weekend alone. The film was so popular it would be rereleased the next year during Christmas week.

To help advertise the film, thousands of statues of Betty Bronson as Peter Pan were made to be given out to winners of newspaper contests.