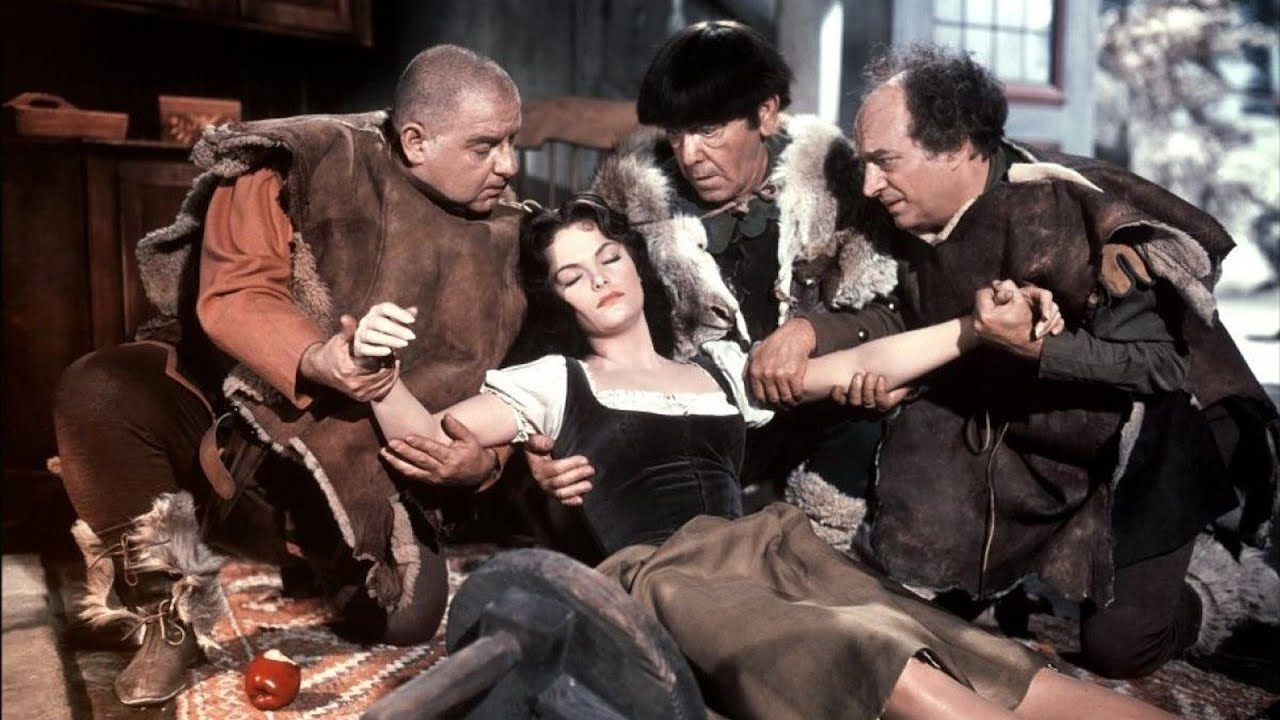 Between making Have Rocket Will Travel (1959) and The Three Stooges Meet Hercules (1962) for Columbia, The Stooges would make their first and only movie for 20th Century Fox, Snow White and the Three Stooges.

Originally set to direct this movie was Frank Tashlin. Tashlin would have been a perfect Stooge director. He began his film career working in cartoons. Though he worked for Van Bueren, Disney and Columbia, Tashlin did his best cartoon work for Warner Brothers. His Looney Tunes and Merrie Melodies cartoons rank among some of the best the studio ever made. Wholly Smoke (1938), Plane Daffy (1944), Porky Pig's Feat (1943), Scrap Happy Daffy (1943), Nasty Quacks (1945), Swooner Crooner (1944), and The Stupid Cupid (1944) all appear in Jerry Beck's book, The 100 Greatest Looney Tunes Cartoons and with good reason. As a cartoon director Frank Tashlin has easily earned a place among such greats as Tex Avery, Chuck Jones and Jack Kinney. In the 1950's Tashlin moved into live action filmmaking. Here he also had great success. He directed some of the best movies Bob Hope (including the brilliant Son of Paleface (1952)) and Jerry Lewis ever made as well as such gems as Will Success Spoil Rock Hunter? (1957) and The Girl Can't Help It (1956). Imagining what a Frank Tashlin Three Stooges movie is a comedy buff's dream. Yet this was not to be. Fox replaced Frank Taslin with Walter Lang. Walter Lang was a great director and one with a well-established reputation. Starting his career in the silent era Lang had directed such classics as The Red Kimona (1925), The Little Princess (1939), State Fair (1945), Cheaper by the Dozen (1950), The King and I (1956) and Desk Set (1957). Snow White and the Three Stooges was not the first time Lang had directed the stooges. He had directed them in the movie, Meet the Baron (1933) in which the stooges played a smaller but quite memorable role. Snow White and the Three Stooges would be the last film of Lang's long career. While certainly a great director, Lang had never been particularly suited to slapstick comedy, which explains quite a bit about this movie. Along with the change of directors, the cost of this film also changed drastically. Under Tashlin this film was planned to be made on a budget of $750,000. However with Lang as director the cost would amount to 3 and a half million dollars.

To play Snow White, Fox hired Carol Heiss. Carol Heiss had not been a professional actress. The world knew her much better as a figure skater. At this time she was at the high point in her career and had the previous year won the gold medal for the 1960 Olympics. So with her being on top of the world, it is no wonder Hollywood came calling. This was to be her first movie as well as her only movie. 20th Century Fox would offer her another film role after this one, but she would turn it down and move back to Ohio. 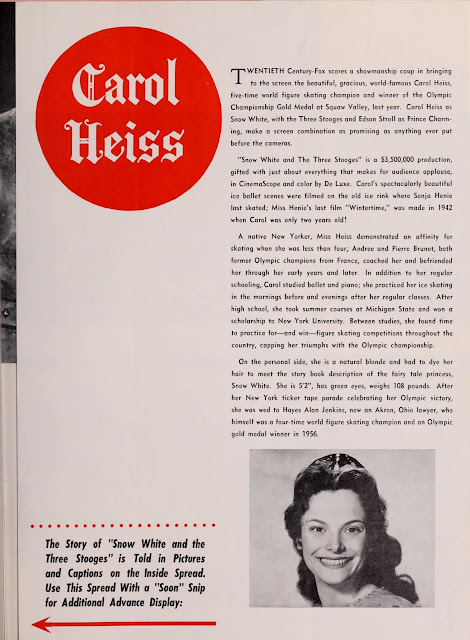 The Wicked Queen was played by Patricia Medina, who had been working in the movie since the late 1930's. This was not her first time acting with a slapstick comedy team. She had also worked with Abbott and Costello in their feature film, Abbott and Costello in the Foreign Legion (1950). Her other movies included the first of the Francis the Talking Mule films, Francis (1950), The Three Musketeers (1948), Aladdin and His Lamp (1952), Valentino (1951) and The Secret Heart (1946). In later interviews, she stated that her and Carol Heiss did not get along and that Heiss tried to get her fired. Medina was also the wife of Joseph Cotton, who many film buffs will know from his role in Citizen Kane (1941) among other classics. Prince Charming was played by Edson Stroll. Stroll would not have much of a movie career appearing in very few films and sometimes in uncredited roles. He would however go on to much more success on TV playing the character of Virgil Edwards on McHale's Navy (1962-1966). He would appear once again with the Stooges in the feature film, Three Stooges in Orbit (1962). Quinto the ventriloquist puppet was voiced by the one and only Mel Blanc, who is best known today for voicing the majority of the male Looney Tunes and Merrie Melodies characters.

This was the highest budget Stooge film (and the only one in color) and none of that budget went to waste. This film looks beautiful. This is not a movie that ever takes color for granted, but instead uses it to enhance the fairy tale feel to this story. The use of color in the ice ballet scene towards the latter part of the movie is epically fantastic. These visuals draw you further and further into the magical world of fairy tales making this by far the most atmospheric movie The Three Stooges ever appeared in.

What this movie actual does better than any other film adaption of Snow White is how it handles Prince Charming. Not only does he have more personality here than in most movie versions, but he also has an interesting backstory. The Queen was to have him murdered as a small child and the Huntsman (Buddy Baer) was hired to do the job. However, The Three Stooges rescue him from this fate, but not without the prince receiving a bump on the head which causes him to lose his memory. So, the Stooges raise him and take care of him. Since Prince Charming is often times the most boring part of this story this is certainly refreshing. Plus there is a real sweetness with his relationship to the Stooges that automatically endures all four characters to us.

This movie also has one of my favorite film versions of the wicked queen (second only to the animated Disney version). Patricia Medina plays this part perfectly. She perfectly captures the sheer evil of this character, but in such a way that you can easily believe that she was able to hide it from so many for so long. She can turn from charming and glamorous to evil and menacing in the drop of a hat. This makes her a far more terrifying version of the character than many other movie and TV versions. As the witch she is able to drop this guise and be pure giddy evil. Her scenes as the witch are genuinely creepy without being too scary for the young audience this film was intended for. All in all, she is everything a fairytale villain should be. With this in mind is interesting to note that the witch scenes had some initial problems.  When Walter Lang saw the original rushes, he felt the way the witch looked was horrible. Her hat looked like a dunce cap and the makeup department had failed to age the actress' hands. Her entire wardrobe and make up was redone and the scenes were reshot, leading us to what we have in the movie today. It is also worth noting (spoilers ahead) that the witch dies by crashing and falling while riding her broomstick and going up in flames. This idea was written and subsequentially discarded from Wizard of Oz (1939), where the Wicked Witch of the West was planned to die in the same way.

While this film is not heavy on action there is one action scene towards the climax of the picture with Prince Charming trying to break into the castle. This scene is actually pretty darn exciting and reminiscent of the great Hollywood swashbucklers.

The story mostly functions as a costume drama for a younger audience, and it works quite well. The cast are quite good in their roles and much of the dialogue is quite well written. The romance is quite well done. While as a kids film the romance here is not mushy, the scenes between Prince Charming and Snow White are quite well done, and the characters have excellent chemistry. The Stooges even get some serious scenes here and they play them quite well, showing what great actors they truly are.

However there are some faults to even the Snow White side of the story. During the ice skating scenes it becomes too obvious that Carol Heiss is the only one of the main actors who can skate and some of the doubles don't quite look like the actors who play the characters in the scenes off ice. Plus the version of Quinto that appears in the ice skating ballet is creepy rather than charming. It made me feel uneasy as a kid and still kind of does today. There is also a scene after the huntsman tells Snow White to run where she runs through the woods frightened of everything she sees. This scene is lifted almost directly from the Disney version of the story, but it is something that works better in animation than live action and therefore comes off as a bit of a pale imitation.

Despite all the things that work about this movie, it does have to contend with the fact that it is not really that funny of a movie and that is an unpardonable sin for many stooge fans. 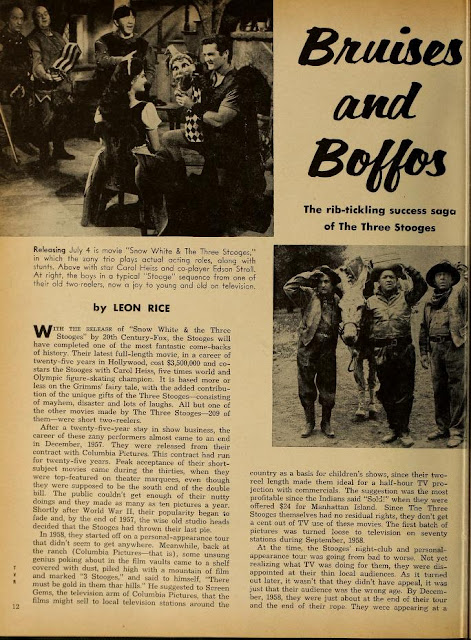 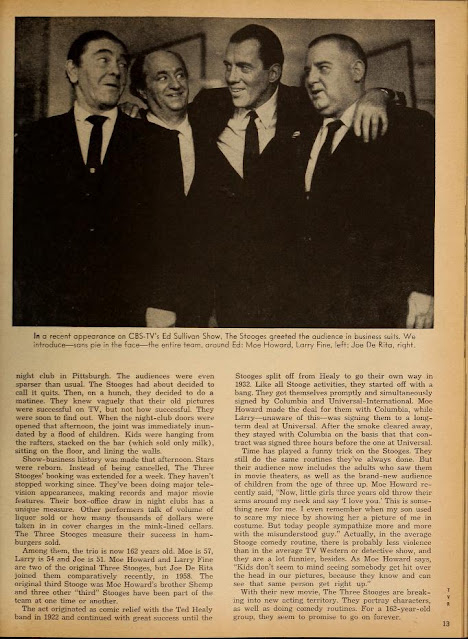 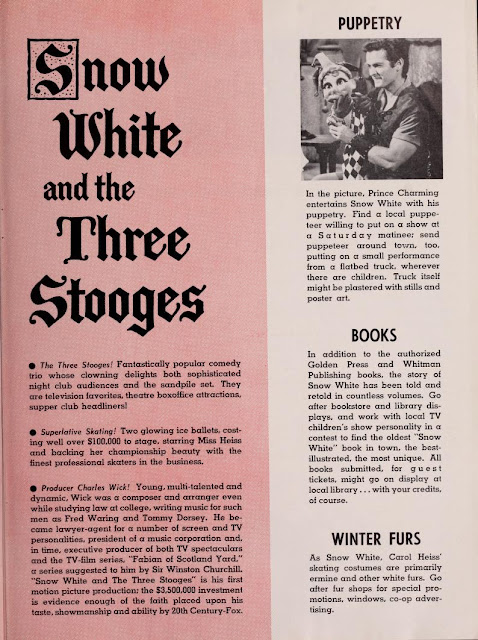 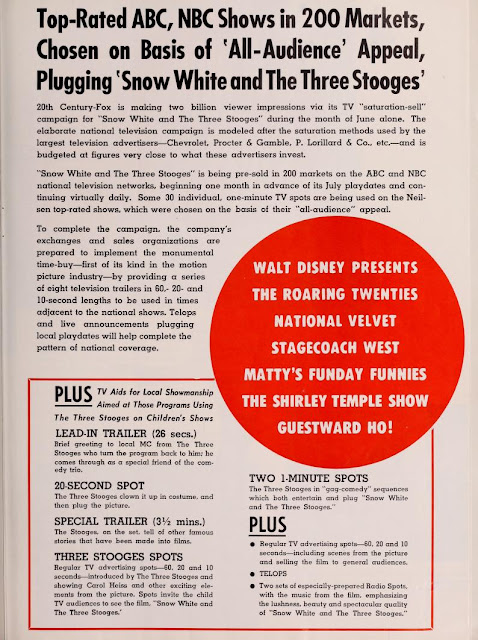 By this time, The Stooges had had quite a bit of success making children's record albums. Albums they had already released included The Three Stooges - Madcap Musical Nonsense at Your House (1959) and The Three Stooges Sing Six Happy Yuletide Songs (1959). Naturally with this in mind, the new Stooges movie needed a soundtrack album. Despite the movie being released in 1961, this soundtrack album was released in 1960. Much of this record was made up of The Stooges' dialogue from the movie. The first side of the album is mostly made of dialogue and provides a pretty good audio version of the film's story. This album also includes a song called Looking for People, Looking for Fun. This song was originally planned for the film but was cut from the picture. It is a shame that this song was cut as it is quite delightful and would have been a highlight of the movie, especially for Stooge fans.

The movie was not a finical success and it is worth noting that the much cheaper made and less elaborate (but more typical of The Stooges) feature films that Columbia made in the 1960's were much more profitable.